A study of The cliffs of Joggins – Part II

Over the past three years I have documented upwards of around 40 trunks in total. As previously mentioned, it was often difficult to see large trunks literally five feet in front of you. I spotted probably around another five “artifacts” which were high up and may or may not have been fossil trees.

Most pictures on this page are links to the full-resolution digital photo.

Four trees (both were actually petrified wood) were found horizontally. Two are in the back of a cave at the bottom of Coal Mine point. I didn’t photograph them, however one of the the more interesting ones is shown here: 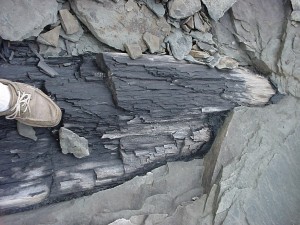 I had been told from more than one reliable source that the bark on this tree, up until 1998, was not yet petrified. Although fascinating as always, most people don’t realize that although rare, this is not unique. There have been many fossils over the years found semi-petrified or preserved due to climatic conditions or other reasons. However, this does strain the credibility of the claimed 300 million years of age for the rock this tree was found in. In June of 2003 I was shown a petrified tree in northwestern Colorado that was coalified at the top, petrified at the middle, and wood at the bottom. This was in Cretaceous ash, right alongside dinosaur bones. All three states of preserved wood. In October of 2004, I personally examined another log in the badlands of Alberta, again amongst dinosaur remains. It too was coalified on top, petrified in the middle, and peat at the bottom.

This tree was on the beach, in situ, near the old bridge at MacCarons river, point 17 on the Map . There was a second one nearby, coming out of the cliff.

Joggins certainly lived up to its reputation with regards to polystrate trees. Here is a sample of some of them, with comments where approrpriate. Point locations are indicated on the Original Map . These are the photos from the original 2002 study. 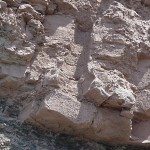 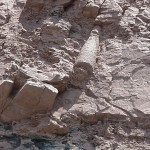 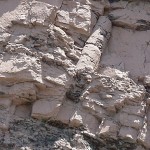 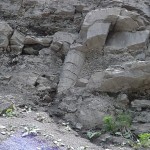 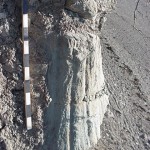 Polystrate tree, point 10 (lycopod and tree-top cavity cut through some 22′ of strata) 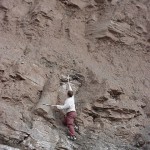 Polystrate tree, point 1 (immediately across on your left at bottom of stairs) 50 cm ruler for scale. This one was gone in 2003.

Previously I had carefully laid out how many had root systems and which ones did not. The rate of erosion on the cliffs was very surprising, and in the following year a number of the aforementioned stumps had roots exposed that were not visible the year prior. As was pointed out to me after I left the first year, sometimes the roots are there, but crushed incredibly thin, as can be seen in this example: 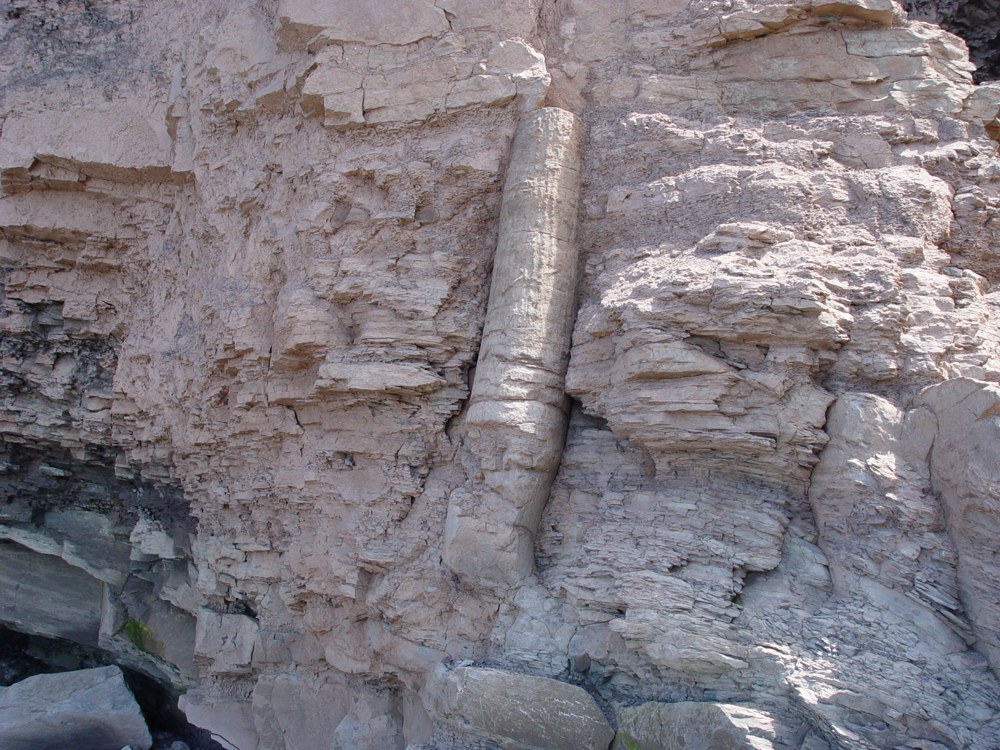 This lycopod became exposed in 2003. 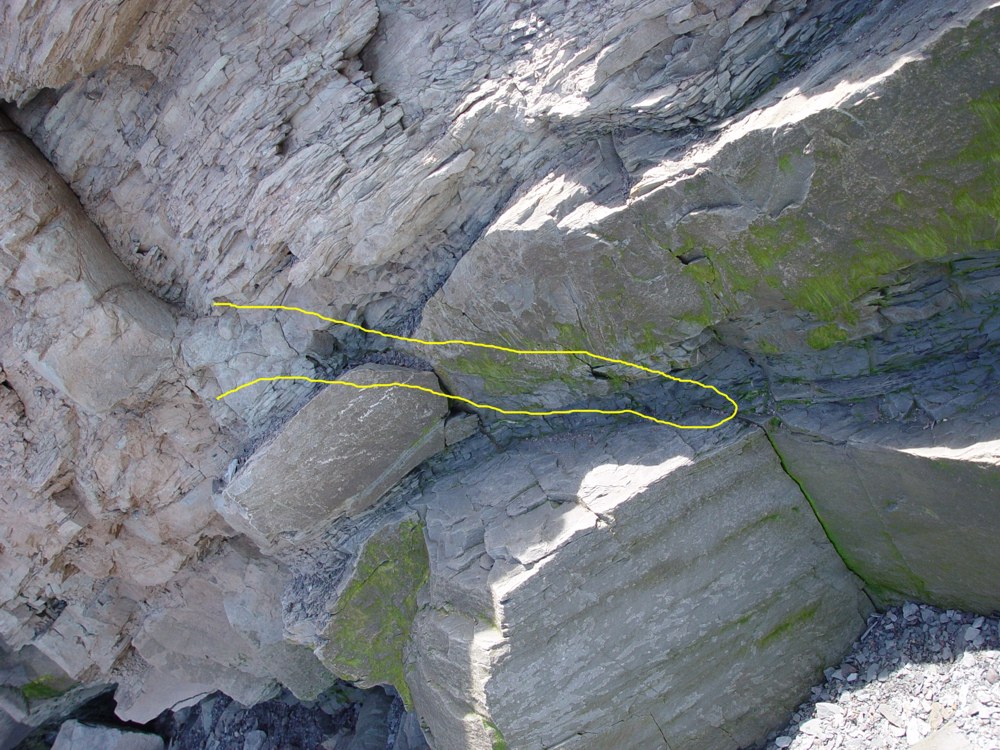 This shoes the root loosely outlined.

However, as you have seen, there are stumps which can be clearly studied which have been clearly truncated – the roots are gone. (i.e., photo from “point 10”, shown above). In fact, the entire fossil story embedded in these cliffs is clearly one of chaos: The plants were broken and crushed. Many were strewn all over the place and lapped all over each other when found horizontal.

The roots of the plants are important, as they would indicate in-situ growth. But before we address this further, I should bring up one startling find that affects the study of the roots:

I had heard rumours of some polystrate trees being found inverted, that is buried upside down, but had never seen any photos. After spending three days there and looking for them all the while, I finally found two which were staring me in the face the whole time.
One look at the picture and you can quickly see why it was so hard to spot. The lycopod had fractured vertically, down the middle, flush with the rock face. What you are left with is the outline (roughed out in yellow) and the infill. Remembering that this was a giant, hollow reed the infill is the mud and debris that was packed into the hollow core of the plant when it was buried, later hardening into the rock infill as the plant petrified. 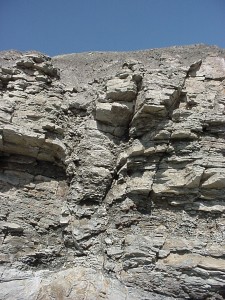 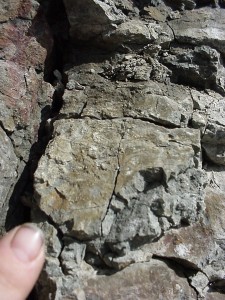 It was definitively identified as a lycopod by the bark which was still embedded in the back half of the fossil. The red arrow marks the spot where I photographed one piece of petrified bark . The bark was protruding from the rock face in several areas and one could follow what appeared to be root stems.

I could not verify for sure that they were root stems without excavating, which could not be done without a permit. However they did appear to be root stems and not branches.

Click here or on the photo to see the full-resolution original without highlights. This fossil was located at point 14 on the map .

Sadly, in the brutal winter of 2003, the following find fell off the cliff and now lays at the base of the cliff in a pile of rubble.
This was north east of the entrance, tucked away around the first corner and about 20 feet off the ground (point 3 on the map). 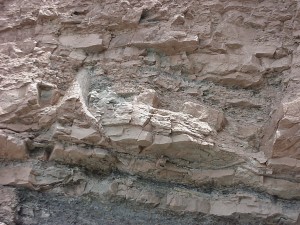 Previously I had documented this as two polystrates, a fossil trunk and a cavity of a fossil trunk, both stumps and their roots are outlined roughly in green. The bottom stump was inverted. The red outlines mark two stigmaria (the roots of a lycopod). The left one did not appear to be associated with anything visible, and the one on the right appeared to be going up in a “Y”, so I had ruled that out as the origin of the lower stigmaria.

However, in the following year, erosion had revealed that indeed this stigmaria did come from the top stump. Instead of it Y’ing, it was merely crushed in the same fashion as so many other stigmaria found here.

Unfortunately, because at the time I was focusing on the longer root, I had basically ignored the smaller one radiating to the left from the inverted stump. This one definitely was associated with the stump, but it too had fallen off the cliff the following year and I could not re-photograph it. This, combined with the overall shape of the cavity is a dead give-away. It is an inverted stump.
Coffin also documented an inverted stump in Sydney, Nova Scotia (part of the same formation).5 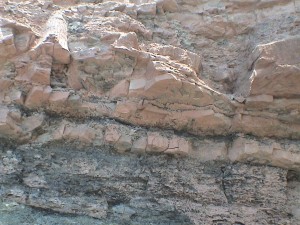 The lycopods, before being destroyed in 2003:

Because of the interaction of the strata between the two lycopods, there is a total of about 10 to 12 feet of vertically cross-sected strata. These plants were laid down quickly, and violently. 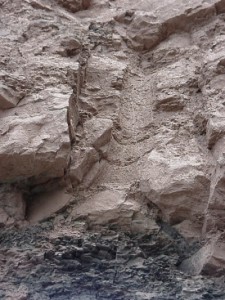 This is one of the trunks which exhibits clear root systems, though most of the roots (if there is any more) are hidden in the rock. This one was probably about 30 feet off the ground. All total, I have probaby round about 10 trunks with intact root systems.

In the first year, I found five trees whose bottom end or both ends were hidden in rock or mud washed down from the top of the cliffs. The inverted trees throw a small monkey wrench into things in that the roots aren’t necessarily on the bottom of the fossil trees anymore. Nevertheless, here are four trees whose root systems and/or possible inversion could not be examined or verified, the fifth will be shown in the next page. 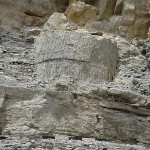 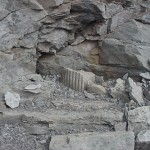 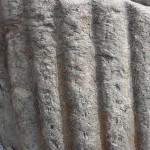 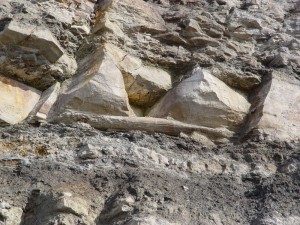 This is the only intact prostrate trunk I have seen. While there are many prostrate lycopods, they are always crushed flat. This is pertinent for consideration when attempting to model how Joggins was formed.

This prostrate log also had intact roots which had clearly been ripped up along with the trunk: 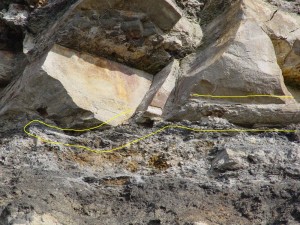 Stay tuned for
Part III: Interaction of strata and fossils
or, jump back to

Part I: A study of the cliffs of Joggins, Nova Scotia