Chances are if you’re here, you’re looking for posters and stuff, so:

Next, here’s the promo video, complete with a segment of my “God’s little creation” video:

Finally, here’s excerpts from the info packet that gets mailed to parties interested in having the museum and myself come to their group.

The museum and the message: 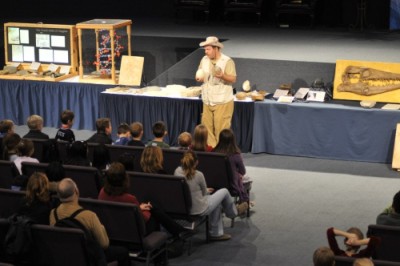 The Creation message is a major key to evangelism in the western hemisphere. How can a person be saved, if they’ve been convinced by “science” (falsely so called) that we evolved and there is no God?
Conversely, the effectiveness of Creation ministry in reaching the lost and making radical changes in public opinion was reflected in a recent Angus-Reid poll. You can read more about this on my website: http://www.ianjuby.org/news.html)

In fact the gospel message of Jesus Christ is invalidated if Evolution is true. The purpose of this ministry is to expose the fallacies of Evolution and proclaim the truth of both the Bible, and its young-earth Creation message. Jesus Christ and the Apostles were all young-earth Creationists, so it is completely understandable when people (especially teens) have questions about the Bible when confronted by the supposed “overwhelming evidence” of Evolution and an old earth.

The museum is the centerpiece to Ian’s lectures, providing tangible evidence of Creation. During lectures, Ian hands out genuine fossils, fossil casts and replicas, and after the lecture, people can take photographs.

Truly all of Creation declares the glory and character of the Lord!

Events you can do:

Family days:
Having a church family day? We’ve got a canopy tent and we can set up the museum on your church lawn. This makes a great addition to church corn roasts and family event days. Guided tours can be given with “mini-lectures” throughout the day, explaining the displays and their relevance to the bible and life.

Ian’s specialty is bringing the creation message to children. In this first of two one-hour sessions, Ian shows children the evidence for God which is revealed to the children, His creation. Adults enjoy this session as well as the simple, down-to-earth way that Ian explains even complex science in a way understandable by everyone. Ian emphasizes “hands-on” for the children in that he hands out fossil casts, and real fossils so that children can touch an actual dinosaur egg or bone.

Already had Ian give a one-hour lecture to the children? Have him come back and give the second lecture in the series geared specifically towards children. Children love science and can plainly see the hand of the Creator while studying the world around them. Children are receiving evolutionary propaganda all the time – it’s time to counter that and teach them to think for themselves. Ian continues to show the children what science is, and what science does – and how the bible can explain the world around us far better than the “frog to a prince” story proposed by evolution.

Ian has researched origins science for over 18 years, has spoken on the subject all over North America, and has made continual appearances on International television. He has a way of giving all the technical detail you need on just about any subject, while simultaneously explaining in an easy-to-understand fashion for the layman. The museum pieces are invaluable for these talks, allowing people to see the evidence for themselves, first hand.

Dinosaurs and Humans:
A fascinating look into the fossil, archaeological, and historical evidence that man and dinosaurs did indeed co-exist; and may still coexist today! The biblical account is examined to see what it says about the dinosaurs. The Paluxy fossil tracks are examined in detail, as well as numerous “out of place,” man-made artifacts in rocks they shouldn’t be in, according to evolutionary dogma.

The Greatest Weapon Ever Formed Against the Bible:
An intriguing look into the history of uniformitarian geology: Where the idea came from, how it was promoted, its profound effect on the scientific community and the world as a whole, and of course, why it has been by far the most effective weapon ever launched against the bible. Contrary to common belief, the idea of an old earth was not birthed out of good science, but rather out of religious motivations, and in an attempt to discredit the bible. Ian exposes the history of bad science which swept the world and ultimately led to Darwin’s theory of evolution. Ian also shows how deep time simply cannot fit into the scriptures, and then goes on to show that deep time not only fails to solve problems for evolution, it actually causes more problems for evolution.

Profound Evidence for Noah’s Flood:
The evidence for a past, global flood is truly overwhelming. After a brief look at what the bible says about Noah’s flood, Ian then walks us through the evidence from the field – much of which Ian has examined first hand. Rocks in Alberta, Canada that came from Idaho and the evidence that suggests they traveled to Alberta in fast-moving water, in probably less than ten hours. The dinosaur skeletons found around the world speak volumes of their death in a watery catastrophe, and fossil sea life is found on every major mountain range. Polystrate fossils around the world not only show rapid deposition, but Ian explains his first-hand research in polystrate fossils which show that the continents rapidly divided as well. Water gaps and wind gaps are explained and their significance revealed. Noah’s flood was the first major judgment of God on mankind, and the evidence for it remains to this day.

Biology: Evolution’s Worst Enemy
Using models of animated biological systems, Ian shows why it is absolutely impossible for evolution to have occured, biologically speaking. Even the “simplest” cell is incredibly complicated, with codependant systems that all have to be in place for the cell to exist! Ian shows mathematically why it is impossible for even the simplest of building blocks to form by unguided processes – even with an infinite amount of time. Ian also reveals leading edge research in genetics, showing that not only can evolution not happen, the exact opposite is happening: We are deteriorating into extinction, not gaining complexity as evolution requires.

Geology and the Age of the Earth:
Is the earth really billions of years old? What does the bible say? Is the bible scientifically correct? Similar to his talk “The greatest weapon ever formed against the bible,” Ian ventures into the idea of an old earth, where it came from and why it is a subject of such key importance. In this lecture, Ian focuses more on the scientific evidence surrounding the age of the earth debate: evidence that supposedly shows it being incredibly old, and evidence that shows it is young, precisely as the bible shows. Many people think geology is boring, but Ian lays it out in an easy-to-understand way that will cause you to never look at another road-cut the same way again. As Jesus said they would, even “the rocks would cry out” to the glory of the Creator. Ian brings it all to a close in a surprising application to real life.

Noah’s Flood: How’d it happen?
One of Ian’s more popular talks, he explains the work of Dr. Walter T. Brown and his “hydroplate” model. A fascinating subject on how Noah’s flood may have happened, this model suddenly explains many features we see around the world today – and many that most can only read about. Ian takes us on a fascinating journey in catastrophism around the world, tying it all together into one stunning model that seems to explain it all in one fell swoop.

A Guided Tour of the traveling Creation Museum:
Ian owns the first Creation museum in Canada, the traveling Creation Science Museum of Canada. In this one or two hour lecture, Ian walks through each display and artifact in the museum. You’ll get the full gamut – a sampler plate of everything pertaining to Creation and Evolution: Biology, archaeology, paleontology, the fossil record and dinosaurs. A fun session with lots of hands-on, power point is not needed, but makes a nice bonus.

Ian Juby is the founder of Canada’s first Creation Museum, the traveling Creation Science Museum of Canada. He is also the founder and president of the International Creation Science SIG for Mensa members, and a member of Mensa himself. In 2007 he took on the presidency of Citizens for Origins Research and Education, in Ottawa, Ontario.
He has spent 18 years studying the origins debate, and has spoken on the subject for 12 years, including multiple appearances on national and international television. A methodical researcher, he has traveled extensively across North America to gain first-hand insight into the evidence pertaining to Creation and Evolution, with a strong interest in geology and geomorphology. Now in full-time Creation ministry, he spends much of his year devoted to sharing the Creation message and carrying on his first-hand research with experiments and field studies. He also consults for Creation Museums and builds museum displays, which can now be seen in seven museums across North America.

Cost:
I try to keep the cost down. The price of gas has made a difference, but very little. I usually suggest $160/day (and you can organize the day how you like), plus travel expenses and accomodations for one night before and after the event, and obviously during the event itselfGas / vehicle wear and tear costs are typically $50/100 kms; for example, Ottawa is roughly 200 kilometers from Chalk River, so travel expenses would be $100.
I also ask for permission to sell books and DVD’s to help pay the bills. If you are a US group, you need to provide someone to sell the DVD’s as I am not permitted to. The DVD’s would be provided and drop-shipped free of charge, and whatever inventory is left over I will take with me so there is no financial responsibility for your group and your group is also financially supported from the profits.
Pay what you can afford policy:
I wish to be very clear that no group is too small, and I do not want any group missing out on ministry because they feel they cannot afford it. If you wish for me to come and give a presentation, I will do my absolute best to come there, even if your group can afford nothing. Please give me a call and just tell me what you are capable of financially, I will do my best to accommodate.
Organization is pretty straight forward: Count on two hours time for setup and take down. It usually goes faster than this, but better to plan extra time for this. I have tables if need be. I usually wind up keeping the book and DVD table up front anyway because people always have questions after the sessions and want to see the artifacts and displays.
Audio:
I have a wireless lapel microphone that can be adapted into any sound system, or your group can provide a microphone. If there’s no sound system, I have no problem addressing even large crowds without amplification.
Space:
I’ve filled forty feet of tables before, but we’ve also managed to fit all of the museum displays into very small churches. I can also tailor the unloading so we only bring in the essential displays, so technically we could fit into just about any building or room that you have.