A study of The cliffs of Joggins – Part I

A study of The cliffs of Joggins, Nova Scotia.

The cliffs of Joggins, Nova Scotia, Canada have become quite famous in Creation/Evolution circles. Besides being a fantastic fossil site, they have attracted interest by their polystrate “trees”. These trees are actually giant lycopods (refering to the last two science notes, we discussed fossil giantism and specifically mentioned lepidodendrun, a Lycopod), up to a meter in diameter. These trees, and other trees were found layered horizontally in the strata, as well as cutting through several strata vertically. This was first observed and still believed by many to be trees which were buried and preserved in situ (in place) as they grew.

Debate has ensued over whether these were trees in situ or not. Creationists have pointed out that the bottom of the tree obviously isn’t thousands or millions of years older than the top of the tree, as would be suggested by the many layers of strata they sometimes cut through. (strata, or layers of rock, are believed to take long time periods to be laid down) Others had cited fine root systems as obvious evidence of the trees being buried in place. I had heard other reports of trees being buried vertically – upside down! I had heard of animal skeletons being found in the stumps and the theories surrounding this discovery seemed to me to support the long periods of uniformitarianism.

For a lot of these reports and discoveries, I was presented with little or no evidence I could examine for myself. In particular, photos were one thing I had hoped for.

So being the kind of person that wants answers and likes to draw his own conclusions, I decided to go and study the cliffs for myself, documenting them photographically to be shared with others who also like to draw their own conclusions.

I spent six days at Joggins, studying and documenting roughly five kilometers of cliffs. The next few “science notes” will be dedicated to a presentation of that documentation and my findings. Later on, probably in 2002, I will be returning to the cliffs as some other features have since been pointed out to me which I missed while there. There will be a future addendum to this study.

I strongly encourage you to visit the cliffs if you get the chance. However, take a few tips from ‘ol Ian:
The cliffs are exposed to tides as high as 45 feet or more, twice daily. Refer to tide charts and plan on heading there from about three hours before low tide. If you get caught by high tide, it’s not the end of the world, but you do get wet and you do get trapped against cliffs that you don’t necessarily want to be hanging around too close to either. The tide steadily erodes the cliffs which makes for excellent fossil viewing as new fossils are exposed constantly. However, this brings up other problems such as…

The beach in many areas is covered in loose, shattered boulders which are underwater twice daily and thus very slippery. Use extreme caution in these areas as one slip of the foot can break bones, crack skulls and cut thus promptly limiting your fossil studies to internet surfing from your hospital bed.

The cliffs are constantly shedding rock. The problem I encountered was that I needed to get close to the cliffs to perform my study, however you are constantly showered with pebbles and sometimes rocks. I saw several large rock slides during my time there. A helmet is a very good idea but stay away from the immediate vicinity of the cliffs unless you need to be there. In particular, there are excessive rockfalls on hot days, cold days, rainy days, windy days and hoo boy, better watch out for it on those spring days.
Please note: These cliffs are a fossil heritage site and you are not allowed to remove fossils or rock from the cliffs without a heritage research permit. Fossils on the beach are fair game. (For the moment)

Joggins is located about 20 minutes out of Amherst, on the Bay of Fundy.
The cliffs are made up of various solid rock and conglomerates interspersed with layers and levels of volcanic ash, coal and compressed sea bed. The strata are generally tilted to the west, typically on about a 30 degree angle but it varies. 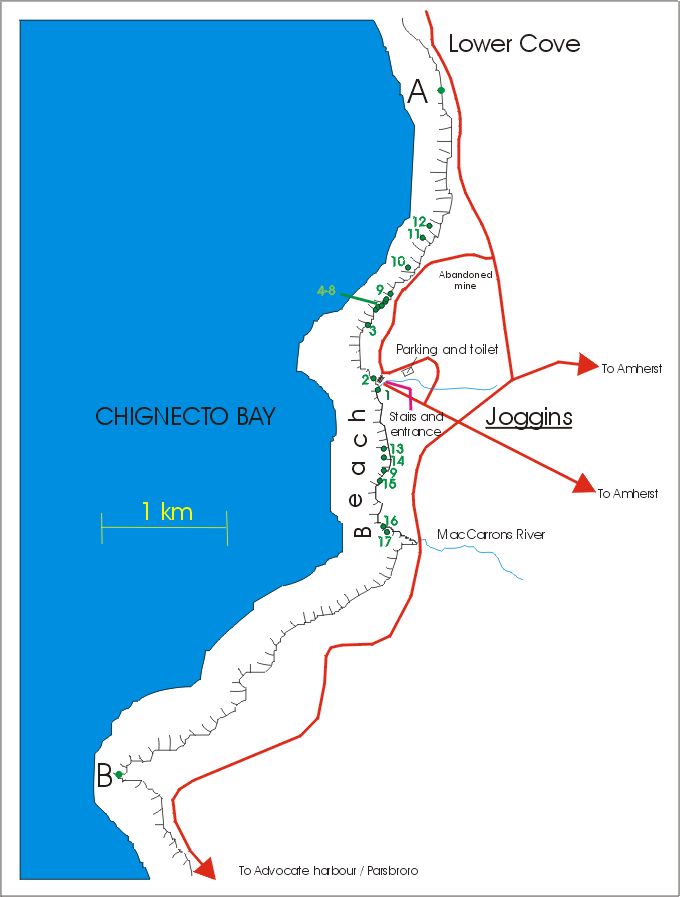 All total, there was approximately 600 meters (~2000 feet) of strata represented from point A to point B, the total area of this study. 1 All five kilometers had sparse to densely populated exposures of polystrate lycopods and calamites. The stretch from point A to McCarron’s river was divided roughly into thirds by two single strata (Points 9 a & b) of compressed sea bed conglomerate, varying in thickness around the 16″ mark.

Fossils in the cliffs were often very difficult to spot for a number of reasons. Mud and gravel washed down the face of the cliff during rainfall would harden and obscure even huge fossil trees. The fossils themselves of course have also taken on the colour of the surrounding rock, making them very difficult to spot. Most of the “trees” were of course, hollow reeds (lycopods, calamites or fossil horsetail) being infilled with the surrounding sediments which later petrified. The trees or reeds would sometimes break apart vertically and flush with the rock face, making the thin outline of the fossil very hard to spot.

The beaches themselves were littered with fossils. Primarily calamites and lycopods, there were also fossil ferns, and trackways. The sea bed congolmerations would contain uncountable multitudes of fish scales and various sea shells as well as small bones.

“Reefs” stretched out into the bay, the remnants of various strata which had not succomed to the erosion. These too of course contained fossils, including polystrate trees of which I found at least one.