A study of The cliffs of Joggins – Part III

It is important to note that in more than one instance, the polystrate plant fossils not only cut through multiple layers of strata but also layers which are further cross-cut by other fossils. 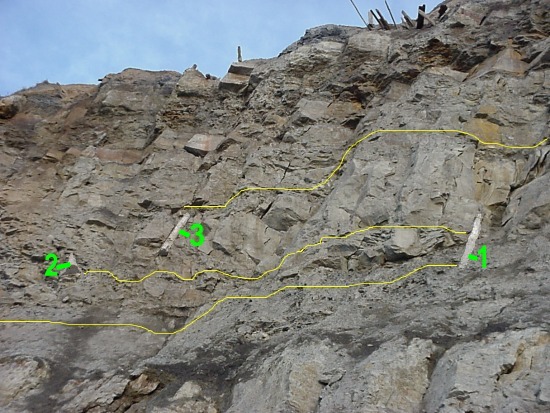 Click on the image for the unmarked, full resolution photo. This is site 12 on the map.

In this example you can see the first lycopod starts (or at least becomes visible, it presumably continues on down through deeper strata in behind the rock) below the second, but ends above it.  The second lycopod overlaps both the first and third lycopods, the third one being exposed at least a further 5 meters or more higher than the bottom of the first.
It is very difficult to photograph fossils, and this is one of the reasons drawings and descriptions are still so important in a fossil study.  The guidelines drawn in, although they may not look it, trace the strata which are roughly uniform and parrallel.  The breaking up of the cliffs creates the bumps and edges which make it difficult to follow the strata.  The lycopods themselves (in this photo, not the high-resolution one) have also been highlighted for better contrast and visibility.

Remembering these are reeds and not logs, how long do you think they would last before succumbing to rot?  A year?  maybe two?  One would think that after a year they would at least collapse and no longer remain vertical.  It would appear that these three lycopods were buried quickly, one after the other.  The 5 meters or so of rock would have been accumulated quickly, certainly a year or less, not tens, hundreds, thousands or millions of years. 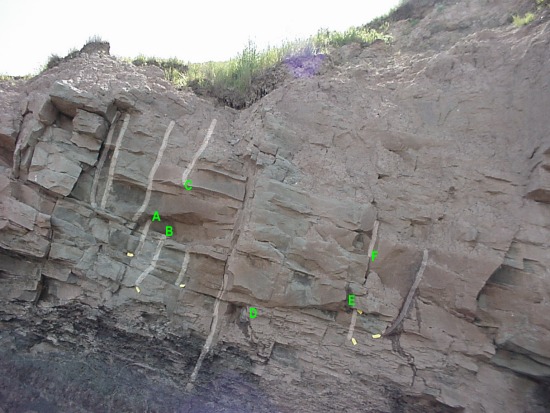 In the same respect, these giant horsetails (again, a reed, and one that still exists today in a much smaller form) are located at site 2, just Northeast of the stairway entrance.

The calamites have been highlighted here for easier identification.  Calamite at point A continues on into the rock, the one at point B goes in behind the rock and comes out again at point C.  Point D is the photo below.  Point E goes into the rock and emerges at point F. 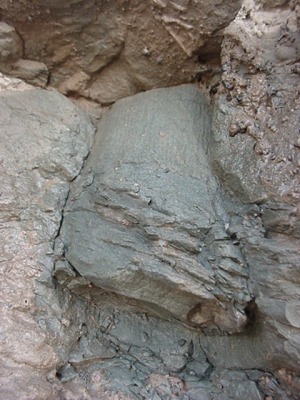 Although only cross-cutting about eight feet worth of strata, it is important to note that these plants were buried within a short amount of time of each other, or at the same time in one giant slurry of mud.

There were two layers of compressed, fossil sea bed. It can be identified by looking for the miriad of small (typically 3-5 mm across) leaves, fish scales and sea shells. The coal seams do not have this. You will also find chunks of the strata on the beach, such as this one.

The seams vary in thickness around the 16″ mark. They are located at points 9 on the map. I think it very important to note that although I looked intently, I did not find one fossil cutting vertically through either of these layers, nor had anyone else that I could find. (Mind you, the people I asked hadn’t seen the inverted trees either) 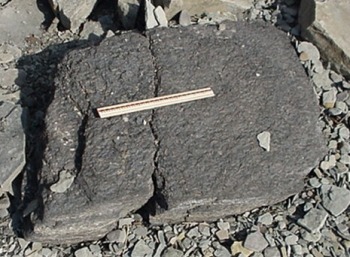 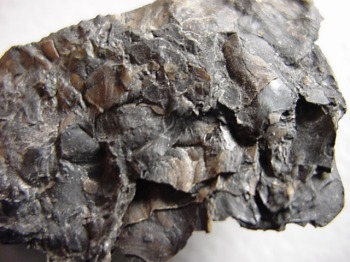 Again, one has to ask:  How could these be formed?  Proposals that I have heard of the water gently washing in and covering up the tracks, thus protecting them, are just too impossible to me.  Two waves would certainly be enough to wash away any track.  If it were harder clay it may need some more working, but reality is these tracks had to have been formed (once again) rapidly!  One strata in particular, near point 3, had myriads of these fossil trackways.  Some of these rocks had fallen to the beach and when split open were full of trackways on nearly every layer.  The most likely explanation is once again, a rapid formation.  A mud which chemically hardens (not unlike concrete) would be the best candidate for preserving fossil tracks. 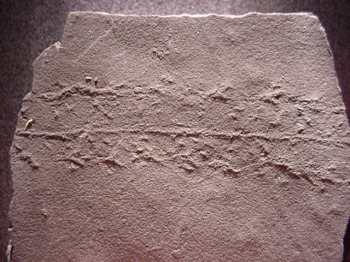 But it would have to harden quickly or else the tracks would be lost to erosion.

There have been several animals found in the base of the hollow lycopods, which were then buried inside as the plant infilled.  The plant and the encased animals later became petrified.

It had been suggested that these plants grew, and were buried in situ.  As the plant died, the top broke off, leaving of course the hollow trunk.  Animals had then fallen into the trunk, to eat others which fell in or to be eaten themselves.  Eventually the trapped animals or remains were buried inside the trunk, all of which later became petrified.  Up to seventeen skeletons had been found in one trunk!

Initially I felt this was a good hypothesis, and even a possible evidence in favour of the long ages proposed by the uniformitarianists.  However, there are some problems with this hypothesis:

These plants were soft, hollow reeds.  They would not have stood up to any kind of burial as they would have collapsed or caved in.  More likely the plants were infilled either before or during the time they were buried.  Plus, the evidence I have already presented flatly refutes the idea of in-situ growth.

For reasons like these there have been a few other theories floating around which suggest perhaps the hollow trunks were laying flat on the ground and were then somehow buried vertically trapping the animals which had made the trunks their home.  There are other proposals that the animals came up through hollow, rotted roots or holes in the stumps.

To the best of my knowledge, the only animals found were always at the bottom of the trunks.  I am not aware if any have ever been found in an inverted trunk.

The story in the roots: 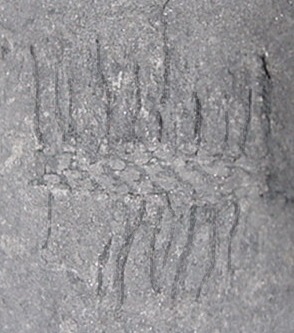 The roots (as well as the lack thereof) tell a very specific story. As I have already mentioned, very few of the plants actually had root systems. Of those, many were broken roots and/or roots with the rootlets stripped off of them.

Stigmaria (the roots of Sigilaria) are easily recognizable by the pocks left behind from the rootlets.

One of the few stigmaria I found with rootlets still attached was this one in the MacCarron riverbed: 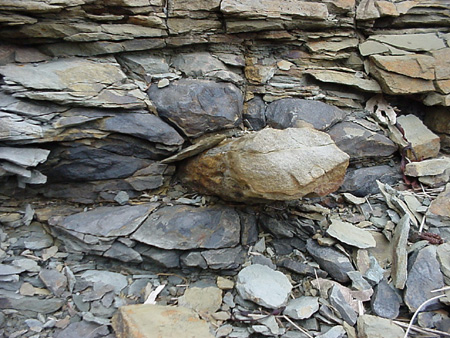 One interpretation (consistant with the other evidences and the hypothesis of violent uprooting) is that the rootlets held a clump of topsoil together with the root, was violently uprooted and transported elsewhere where it was buried and petrified.  The discoloration of the rock immediately surrounding the root is the topsoil that was transported with the rootlets.

Once again, the roots I did find were broken fragments, often stripped of their rootlets which were found in other rocks like some mowed grass.

There are still many who claim that these polystrate fossils were formed from plants which were growing in situ, and slowly buried, forming these fossil “forests”. However, this is flatly refuted by the evidence. Broken lycopod trunks and chunks, buried at different, cross-secting levels; broken and missing roots; stripped rootlets; inverted lycopods; and vertical (polystrate) lycopods suggest rapid, violent burial by flash flood.

The cross-secting of many strata for many different levels also seems to indicate that at the very least large chunks of the geological strata were laid down virtually simultaneously.

With the exception of two compressed sea bed strata, I see no reason (other than the sheer scale required of such a flood) not to believe that the whole 2000 or so feet wasn’t laid down together. I have heard some suggest that this formation was made by a series of flash floods over many years. This is certainly a fair suggestion, but we are talking about a remarkable series of events: Enormous flash floods, laying down thirty feet or more of strata, one right after the other for years and years on end (save for two short breaks, each recorded by the two sea-bed strata which would indicate it was underwater during those times).

This also still does not answer the Creationist’s claim that geological strata do not take even tens, let alone thousands or millions of years to lay down enormous depths of strata. Thirty feet or more can be laid down very rapidly – rapid enough to bury and preserve an entire giant lycopod. If that thirty feet was obviously laid down rapidly, what reason is there for me to believe that strata this thick (or thicker) elsewhere in the world represents thousands or millions of years?

It is at least as likely that a world-wide flood as recorded in Genesis made this whole formation in a relatively short amount of time, each strata being laid down by enormous tides travelling by the site twice daily. In fact, the two sea bed strata fit the explanation of a global flood better than the hypothesis of many flash floods. The volcanic ash deposits interspersed among the strata would also fit the global catastrophe model as undoubtedly there would have been tremendous volcanic activity going on during this time.

Joggins is a world-class fossil site, utterly unique. It is truly fascinating and mysterious, raising questions in the mind of the inquisitive.

Why were the lycopods and calamites buried vertically? We have a model for trees to be buried vertically, as we see happening in Spirit Lake, Mt. St. Helens, Washington, right now. But Joggins is a very unique site – why did giant, hollow reeds get buried vertically and infilled without collapsing? Why is it that the two petrified wood tree trunks I did find were horizontal?

Why do we find animals encased in the bottom of these hollow trunks? Have there ever been any found in the inverted trunks?
I didn’t personally find any, but I have heard reports of slabs of rock with “fossilized mud” which had dried in the sun enough to crack and flake. If this fossil site was caused by a flood, why would we find dried, cracked mud hardened into rock? How long would it take for mud to dry, crack and flake? Is there another explanation for these formations?

It has been drawn to my attention that cracks in mud can form underwater.

“Mud cracks (shrinkage cracks) can also originate subaqueously as a result of synaeresis (Jüngst 1934). A rapidly flocculated clay layer develops shrinkage cracks due to compaction (White 1961). Similarly, an increase in salinity can also generate shrinkage cracks in the mud layers (Burst 1965). This process can be important in coastal lagoons and inland sebkhas where salinity of water increases markedly during certain periods. Kuehen (1963, 1965) and Dangeard et al. (1964) also produced underwater shrinkage cracks in the laboratory.

“Such subaqueous shrinkage cracks differ from subaerial desiccation cracks in that they are not so well-developed, the cracks are rather narrow, and they do not possess well-developed V-shapes in transverse sections. In general, subaqueous shrinkage cracks are less regular in form and often incomplete. Sometimes, cracks are developed as open, straight to curved cracks occurring singly or in sets, having a preferred orientation. The cracks are 2-8 cm in length and known as linear-shrinkage cracks. According to Picard and High (1973) linear shrinkage cracks develop when relatively thick water-saturated thixotropic muds dehydrate usually under standing water. ”
(Depositional Sedimentary Environments. Second Edition. Springer-Verlag, New York. 1980 p.60).

Once again, what appeared at first to be evidence of long periods of time adds at least as well into the hypothesis of a massive flood.

I have also come across a claim of a creek bed eroded into strata and preserved by infilling. Lack of strata erosion has always been cited Creationists to claim that strata do not take long periods of time to form. If this is in fact an eroded stream or creek bed, this is the first of its kind in the world that I personally have ever heard of. If true, why is it here? This entire site loudly proclaims rapid formation, burial and upheaval. This seems the most backward place to find such a unique feature. Is this strata vertically cross-sected by any fossils?