In this newsletter:
1) Something fishy with fish fingers
2) The bankruptcy of homology 3) Website pick: Physicians and Surgeons for Scientific Enquiry 4) Niagara Falls creation tour 5) Answer to the last contest question

Just this past week, an article came out in Nature magazine relating to Panderichthys, a supposed “fishopod.”  Bear with me – this is going to be confusing, but that’s not my fault!
If you recall, the evolutionary myth has fish evolving legs and walking up on land, becoming tetrapods (land walkers).  Hence the nickname “fishopod” – it’s half-fish, half-tetrapod…. or so certain evolutionists would have you believe.

To see just how clear the mud is, we need to first take a crash course in fishopod evolution – work with me here!

Wikipedia nicely spells it out for us, in graphic form: 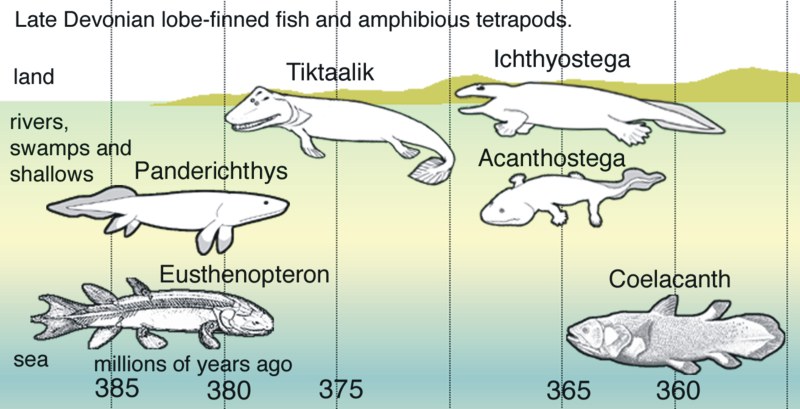 You can see the implied “evolutionary ascent” from fish to fishopod over time.  Seeing as how all the fuss is over a fin, I’m going to focus just on the fins, timeline, and supposed evolution.
Let’s first ask the question “Why do they think these fossils show an evolutionary sequence?”  The implied answer of course, is that these fossils show improvement and change from fish to tetrapod over time.  But even just looking at the fins, the whole story just turns into another fish story real quick!  While I don’t believe in these millions of years, and I don’t believe in these “radial bones,” I’m going to meet the evolutionary myth where it’s at and examine the interpretations.  I’ll use a chart from Nature so you can see the “evidence” and claims yourself.:

So if we were to follow this “fossil sequence,” it would appear that the evolution of the finger has been a wild ride:
First we evolved five fingers, then in our evolutionary ascent we lost two, then gained four back at Acanthostega.  Once on land, the number went back down to four (most amphibians have four toes).  Apparently we evolved a complex wrist, only to lose it again at Acanthostega, and then apparently re-evolve it back once the critters got onto land.

In the meantime, what is not shown accurately on the wikipedia timeline above is that the Coelacanth is actually the oldest known creature on that chart!  The oldest Coelacanth known is from Australia and dated at over 410 million years old. Although only a jawbone has been found, presumably it’s at least similar to the other Coelacanths we do know of, which have lots of “radial bones” in its fin!
The Coelacanth has evolved over hundreds of millions of years into… Coelacanths.

The Coelacanth makes a marvelous study, because before it was found alive, evolutionists were saying the exact same things about it that they are now claiming about Ichthyostega, Tiktaalik, Acanthostega, etc….

In fact, you can still see this bias in modern day reports and websites.  For instance,

“the fossilized lung fish – or coelacanth – sets back the timeline for when marine animals made their first excursions on to land….The coelacanth, which the paleontologists describe as a ‘living fossil’ fish with ‘proto legs’, “

(From I.O.L. Science)
Are these interpretations based on observation?  No – because the Coelacanth lives in very deep water, and does not use its fins for anything other than swimming.  So what’s this nonsense in the I.O.L. article about excursions onto land? There is no connection – simply evolutionary assumption.
We can observe the Coelacanth behaviour.  We can not observe the behaviour of Acanthostega, Ichthyostega, Panderichthys and others because they are not known to be alive now.  Therefore, all this talk of using their fins to walk on land is nothing more than wild speculation, the same wild speculation they hurled upon the Coelacanth, which turned out to be false. The evolution of fish to tetrapods is also nothing more than wild speculation.

Homology is a comparitive similarity between two organisms.  For example, in this incredibly complex-looking drawing:

the bones in the limbs of various animals can be similar in position, structure, etc…

This is a common argument used to promote evolution, as it could be interpreted that these animals all have similar limbs because they evolved from a common ancestor.  Thus, they all inherited traits from this one ancestor they all had in common.

It sounds impressive at first, but there a few problems with this interpretation.  Bear with me while I get a little technical on ya:
With the fairly new science of genetics, we can now map out what genes hold the blueprints for various parts of our bodies.  As a result, we now know that while the bones between two animals may appear to be homologous, the blueprints for these bones come from completely different parts of the genome! Therefore similarity between two organisms is not because of a common ancestor, otherwise, they would also share similar, homologous traits in their genome as well.  They do not. 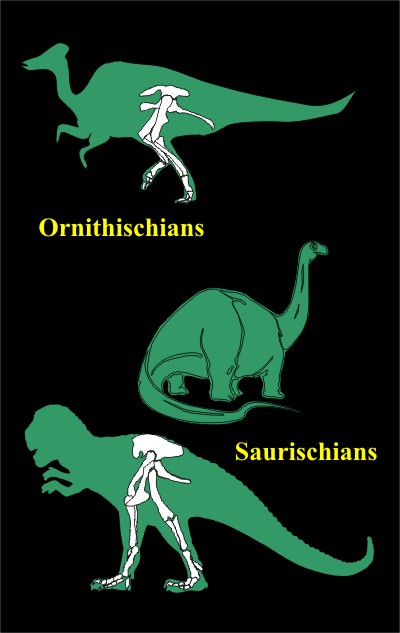 Homology is only cited when it appears to support evolution. Simultaneously, the lack of homology is ignored when it poses a problem for evolution. For example, a great many evolutionists (and National Geographic) believe that dinosaurs evolved into birds.

Many dinosaurs fall into two classes, based on their hip structure.
The Ornithischians are named after their ‘bird-like hips.’  ‘Orni’ is from the Greek word ornitheos, for ‘of a bird,’ and ‘ischion’ for ‘hip joint.’

The Saurischians include bipedal dinosaurs like T. rex and the Sauropods.  They are called this because they have hips like lizards and ‘Saurus’ is the Greek word for ‘lizard.’

If homology were actually an argument for evolution, the answer would be obvious – it would have to be the Ornithischians.  However, the dino-to-bird theorists actually believe it was the Saurischians that evolved into birds!

Clearly homology is not evidence for the evolutionary myth.

I was recently forwarded the link to the PSSI website, and shortly thereafter, the CEO of PSSI happened to drop me an email.  I had encountered PSSI once before, via Dr. Joseph Kezele (http://www.azosa.org/Professionals.aspx), who is the president of The Arizona Origins Science Association, AzoSA (http://www.azosa.org/).  I’ve spoken there a few times and Dr. Kezele and his team are an impressive and active group.

The blog on the PSSI website has not been kept up to date since the membership list was published last year, however the comments are still pertinent.  They reflect quite nicely what I was trying to say in the last newsletter, and I’d encourage readers to go check it out:
http://www.pssiinternational.com

Coming up in a few short weeks, Josiah Detwiler (director of the Akron Fossils and Science Center) will be organizing a creation interpretation tour of the Niagara Falls and Niagara gorge on Sunday, October 5th.  The following day we will be meeting Canadian side and studying and touring there as well, and anyone is welcome to join us on that day as well.  I’m speaking in Madoc, Ontario on the 5th, so I won’t get there till Monday morning.  The information is here, please contact Josiah directly for itinerary, and to let him know you’re interested.

Dear Friends,
I have exciting news for you. I recently met a Christian man who is a creationist geology guide in Niagara Falls! I have scheduled a group tour with Terry Kanouse (the guide) on Sunday, October 5th from 3-7 PM on the American side of Niagara Falls in Buffalo, New York. And I am extending an invitation for you and your family to join me on this trip.

The guided tour will take place on the rim of the Niagara Gorge along the public viewing overlooks and walkways. The tour will be well suited for both children and adults. Terry Kanouse, was a guide for a tourist company at Niagara Falls for about a decade. Terry was fired from his job when it became known that he did not believe in the standard millions of years timescale for the formation of Niagara Falls.

Free Group Tour
The group tour is free with the exception of a $12.50 per person fee to ride the Maid of the Mist. Even though Terry is guiding the group tour free of charge, I’d encourage everyone that comes to consider giving Terry some kind of financial gift, as able. Terry takes special time off from his busy job as a security guard to give these guided tours and I’d like to be able to bless Terry and encourage him in his ministry.

Please Reply ASAP
I apologize for the short notice about this field trip but I did not have all of the details for the trip arranged until just recently.

If you are interested in coming on this trip I need to hear back from no later than a week from today (Wednesday, October 1st, 2008). In the last newsletter, you were challenged to come up with the correct date of the dedication of the Cambodian temple of Ta Prohm.  Congratulations to those who won.
The year of dedication was 1186 A.D.

Don Patton and Dennis Swift were the first to bring the stegasaurus carving to the attention of the creation community, this is one of his pictures.

Head on over to Don Patton’s website report on this find, and ask yourself the question:

“How did they know what a stegasaurus looked like in 1186 A.D., when the first stegasaurus was discovered in 1876?”