1) On the road again…
Welp, I’m on tour in the US.  I spoke in Madoc, Ontario, then headed down to Akron, Ohio, where I’ve had the priviledge to speak to well over 700 people in the space of 4 days, not including the listening audience for WHKW radio in Cleveland, where I did a live call-in show with Pastor Al.

I’ll be speaking at another Christian school this week, and my traveling museum will be on display as a special exhibit at the Akron Fossils and Science Center until Saturday, then I cut outa here and head for Minneapolis, where I’ll be speaking at the TCCSA.

From there I head down to Glen Rose, Texas, with a brief stop in Green, Kansas.  I’ll be speaking to the students at Flint Hills Christian school during the day, and there will be a session open to the public in the evening of the 29th.  I’ll be speaking on “Dinosaurs and humans.” It was a packed-out house when I spoke there two years ago, and I’m looking forward to seeing my friends there again.

I’ll be speaking at the Creation Evidence Museum in Glen Rose, Texas, on November 1st.  I’ll be tag-teaming with my mentor, Dr. Carl Baugh, as he addresses the adults and I’ll address the children.  Then it’s up to Dallas to speak at MIOS on November 4th on “Evidence of Noah’s flood from the Dinosaurs.”  Then on over to Abilene, Texas and the Discovery Center for the weekend of the 14th.

There’s more to it, but just check out the itinerary page to see if I’ll be anywhere near where you are, and if you wish to try and book a presentation, just visit the contact page.

As I write this, Canadians are voting across the country (I went to the advance polls before I left) and I pray earnestly for both my own country, and for the US as their elections come up as well.
I normally don’t delve into politics, but when politics ventures into the realm of dinosaurs and humans living together, I just can’t help myself <grin>. 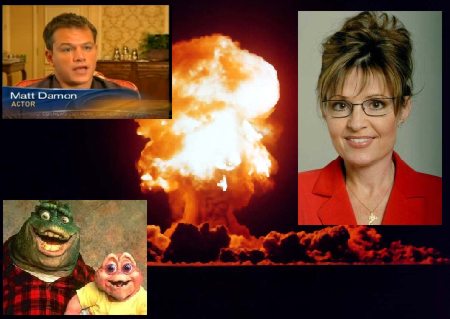 Everyone was rather shocked by McCain’s vice-presidential candidate pick, Sarah Palin.  The liberal media jumped all over the idea that she was all for teaching creation in public schools.  Apparently CBS just HAD to interview actor Matt Damon (of the Bourne conspiracy flicks) to get his opinion on Sarah Palin.
Apparently Damon is supposed to represent the “sane” part of the US population.

Not quite sure why they had to interview someone who makes his livelihood making fiction look like reality, but that’s what they chose to do.  I’ll probably include this clip in my introductory video on my website (just go to https://ianjuby.org .  The video on the front page is my introductory video) with my commentary, but I’ll give some input here.

It’s utterly hilarious that Damon somehow manages to find a relationship between dinosaurs, nuclear missile codes and politics!  The stunning words of wisdom coming out of Damon’s mouth was a clear stab at Palin’s creationist leanings, and consequently her sanity:
“…crazy.  I need to know if she really thinks dinosaurs were around 4,000 years ago – that’s an important – I want to know that; I really do – because she’s gonna have the nuclear codes.”

No, no, no, Matt – you got it all wrong!  It wasn’t 4,000 years ago – heck, no, it was a lot more recent than that!
First of all, her belief that dinosaurs lived 4,000 years ago is not at all uncommon, and a great many perfectly sane people believe it. Let us not forget the national poll taken by Angus-Reid last year at the opening of the Big Valley Creation Science Museum, where the majority of Canadians believed that dinosaurs and humans lived together at some point in the past.  While I’m unaware of such a survey being conducted in the US, every other similar survey about the beliefs of the US population has pretty much mirrored the Canadian population identically, in regards to the whole Creation/Evolution debate.

But let’s take a look at Damon’s subtle suggestion that someone is “crazy” for believing this.  Who would you trust with nuclear codes?

Furthermore, Damon is clearly speaking WAY out of his realm and in an area he clearly knows nothing about.  The evidence that dinosaurs and humans have lived contemporaneously (and also at the same time) is quite overwhelming.  Just to give you a sampling of some of the evidence out there:
1) Ancient artwork such as the Ica Stones, and the Cambodian temple of Tai Prohm
2) Ancient artifacts from humans found in rocks dating to the dinosaur era, or earlier (see pages 6-8 in my Virtual Museum tour)
3) Fossil human remains found in layers below the Morrison formation – famous for its dinosaurs
4) Fossil human footprints found together with dinosaur tracks – i.e.; the Delk track, the Taylor trails, etc…

Oh – and did I mention the numerous C14 tests carried out on dinosaur bones, mammoth bones, wood fragments from dinosaur bearing layers and coal samples from layers “older” than the dinosaurs? Ya – these C14 dates always have a nasty habit of returning dates of 5,000 to 50,000 years old – a far cry from the assumed ages of 60 million to 300 million years old for these layers (there are several articles on this, but for one example, see Miller, et al, CRSQ, September 2006).  See my “Complete Creation” videos, part 8 & 9, viewable for free on my website.

Palin is not “crazy” Damon – stick to acting; you’re good at that.

Two corrections from the last newsletter:
I was going to plug Spike Psarris’ video in my last newsletter, and so the index contained “Cool astronomy video.”  Then Spike asked me to wait, he wasn’t quite ready yet, so I deleted it but forgot to remove it from the index.  So no, you didn’t miss anything.

In my “Something fishy about fish fingers” write-up, I mistakenly said that Eusthenopteron had six radial bones.  This is incorrect: It had five.  My point still remains the same however.

It was brought to my attention this past week that the ASA (a theistic evolution group which is rather anti-young-earth) had published a “rebuttal” to the RATE group’s C14 dating claims.  Of course, it isn’t just the RATE team that’s finding loads of C14 in places where there should not be any at all, but the RATE team has published the most extensively on it.
I mention the RATE research and the meaning of the results in parts 7 & 8 of my “Complete Creation” series, as always, available for free viewing on my website.

The ASA reply is here:
http://www.asa3.org/ASA/education/origins/carbon-kb.htm

While these arguments had been answered by the RATE team a long time ago. Apparently the ASA folks were unable to respond and have decided it is better to ignore the RATE team, rather than to draw attention to it.  But that’s okay – that’s what I’m here for!  I’m here to draw your attention to the facts that the evolutionists do not want you to know.

If you want the technical answer, here is Baumgardner’s response to the ASA claims:
http://www.answersingenesis.org/articles/2007/11/30/feedback-rate-contamination

As for the shorter, simplified answers, you can watch Complete Creation, part 8 where I explain one of the problems with the ridiculous suggestion that the C14 in coal is contamination.  Bottom line: even if the coal had absorbed it’s volume in modern air, the total increase in C14 in the sample would be 1/1000th of the C14 that was measured.

Further suggestions that somehow, nearby Uranium deposits are contaminating the coal with C14 is just as ludicrous: the uranium to carbon ratio would need to be approximately 1:2 (http://articles.adsabs.harvard.edu/full/1985Metic..20..676J) ; or by mass, you would have to have a deposit of approximately 91% Uranium!

Other arguments against the RATE project were equally ludicrous – i.e., suggesting that the helium retention in zircons (video 8) was because the granite was colder in the past is insufficient: Even if the granite was immersed in liquid nitrogen for 2 billion years, the helium would still have leached out of the zircon crystals contained within it.  Heat up the granite, and you accelerate the helium leakage, and thus get an even younger age than 6,000 years for the New Mexico granite samples.

These incredibly insufficient arguments are, sadly, typical of anti-creationist “research” and response.

If you’re within driving distance of Regina, Saskatchewan this coming weekend, you want to attend the “Christianity on trial” conference, hosted by Berean Truth Ministries, and having our own Canadian Creationists Vance Nelson (Creation Truth Ministries, Alberta) and John Feakes (CARE ministries, Winnipeg, Manitoba).

I wish I could be there,  but sadly, I’m on the road in the US – it sounds like it’s going to be a dandy conference.

To be honest, I don’t like dealing with issues like this.  Sadly, Dr. Denis O. Lamoreux has argued vehemently and vociferously over the years against the bible – while simultaneously claiming to be a christian.  One has to wonder when someone claims to be a follower of Christ (hence the name Christian) while publically arguing against the things that Christ said and believed.  Sadly, he is deceiving many bible college students and many Christians across Canada, and enough is enough.

Mike Bierle has written an excellent webpage dealing with Lamoreux’s “arguments” against the bible, so rather than reinvent the wheel, I will simply point you to his website for some excellent reading:

7) Really cool astronomy video (no really – this is it)

A good friend of mine from Washington has compiled an excellent, badly needed video on astronomy.  Spike Psarris was an evolutionist, who wound up convinced by the evidence that there was a Creator God, eventually converting to Christianity and young earth creation.  His passion has always been astronomy, and so he has just released his first video, shot in wide-screen, “What you aren’t being told about astronomy.”
I was honoured to be one of the reviewers, and I cannot recommend it enough.  It is easy watching, humerous, enlightening, and awe-inspiring.  There was times watching the video where you could just sense the presence of the Lord and couldn’t help but stand in awe at His power and what he’s done.  You also couldn’t help but laugh at the same attempt by evolutionary theories to explain the unexplainable… at least, things that were unexplainable without a Creator God.

Spike has granted even more honour for both myself and you, my subscribers:  Normally he only has two chapters posted on the internet for public viewing, however, for the subscribers of this newsletter, he has posted the entire video online, for free viewing. If you like what you see, he has gone one step farther and offered a discounted price on the DVD for subscribers to this newsletter. This is for a limited time – once I post this newsletter to the archives (probably by this weekend, the 20th), the page and the deal will be removed from his website.  Go to:
http://www.creationastronomy.com/preview/ian.php
to access all twelve chapters of the video and the discounted price of $14 (normally the DVD sells for $19US plus shipping) is already built into the “But it now” button on the page.

Do hurry though – you only have a few day’s access (to give a chance those subscribers who only check their email every couple of days.).