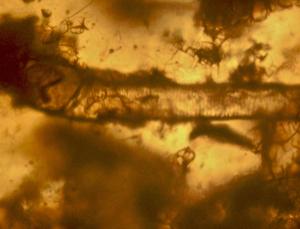 Supposed “100 million year old hair” found in some amber is identical to that of modern mammalian hair:

As we read some ten times in the first chapter of Genesis, God created life to reproduce after its kind. Evolution operates with radical changes in an organism over time.  Therefore we have a nice example of some scientific evidence we can look for to figure out if creation or evolution is true.

With the discovery of this fossil hair, we have another example of what we see in the fossil record: stasis – things reproducing faithfully after their kind.  Even going by the evolutionary timescale (which I do not believe, I see the evidence as quite good for an earth that is young and not billions of years old), what we see in the fossil record is stasis – everything stays the same, affirming the Biblical account of creation and refuting the evolutionary myth.