Today’s New Bite is actually old news – a meteorite reported on back in 1996, claimed to be from mars, and allegedly containing fossils of bacteria within. 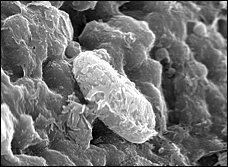 The original research was rejected by the majority of scientists – and with good reason.  However, the researchers have brought it back from the dead to go for another round.

When you glance through the Washington post article, you’ll notice:

“the meteorites they are studying — which can be identified as Martian because the gases inside them match the Martian atmosphere — contain the remains of living organisms.”

So then according to NASA, the correct answer is b) we know the rock is from mars because it smells like it came from mars.  There is no other reason to believe the meteorite came from mars.

So the source of the rock is highly questionable at best.  Then there’s the matter of the “fossil bacteria” found within the rock, which has been hotly debated by the evolutionary scientists themselves, with the majority rejecting the “fossils” as such, and instead claiming these are nothing more then geological artifacts.

The “martian meteor” researcher, McKay “pointed to the presence of what appear to be fossilized microbes in other Martian meteorites,” according to Washington post.  Now hold on a minute here: Let’s say that this is true.  Let’s say that yes, there are multiple meteorites that have been found with fossil bacteria in them.  The idea that multiple meteorites could be launched from mars, each with fossil bacteria in them, on a favourable trajectory that allowed the meteorites to land on earth, is stretching credibility to the breaking point frankly.

Instead, I would suggest that a far more feasible explanation would be that these rocks came from earth, and are simply returning home.  “How?” you might ask, to which I would simply encourage you to read through Dr. Walter T. Brown’s hydroplate model, and in particular his chapter on the origin of comets, meteoroids and asteroids. His entire book is available on line, for free at http://creationscience.com

This is a vastly superior model to any evolutionary model which has rocks from mars somehow magically getting ejected into space and landing on earth.