Life on Mars! (hopefully it’s intelligent – there aint none here!) 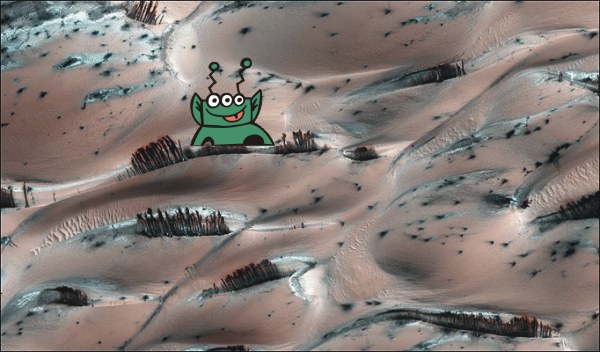 Straight from the Sun:

(By the way, if you read the article, you’ll need your British/Canadian dictionary handy – a “boffin” is a scientist/researcher)

NASA has said they now have evidence of life on Mars.  BUT – don’t get too excited just yet, they didn’t find life, they only found gypsum, which may indicate that there may have been “pond scum,” which the Sun article claims is “the building blocks of life as we know it.”

As a news bite, I’m not gonna say much:

1) They didn’t find life, they didn’t find pond scum – they found minerals which they think may have been laid down by pond scum. (or perhaps it formed by other natural processes)

2) Even if there is “pond scum” on Mars, then one must ask if the pond scum evolved there, or was Mars contaminated by Earth?  We do have pond scum here – and the possibility that the pond scum somehow got from earth to Mars is far, far, far better then pond scum evolving from non-living materials on Mars.

I deal with the subject of life on other planets in my soon-to-be-released video “Aliens and the evolution connection.”