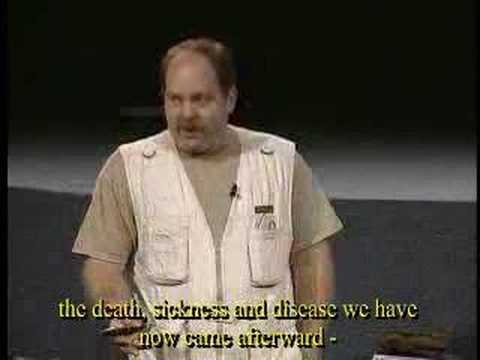 I’m currently on the road installing displays at three different museums (more
on this later).

Later on this week I will send out a second email with science notes and
commentary (my apologies to those who felt overwhelmed by my many emails), but
I know many people have been anticipating the “Complete Creation” videos, so I
wanted to get this notice out asap.

Special thank-you to the many individuals who have prayed for my dad (who’s
been horribly sick for a year and a half now) and my family.  It’s very
difficult being on the road so much with a parent who’s in the hospital.
Thank you for your continued prayers.

After a hiatus, and a long string of emails from people wondering what
happened to the series, Part 8 is now on line:

In this segment, we finish off the different dating methods used on rocks and
biomatter, and we introduce the compelling evidence that man and dinosaurs
lived together.

Fall tour:  Contact me if you’d like to add your group to the tour.  The
approximate itinerary is laid out below where specific dates have not yet been
cemented, or no group has specifically booked yet.

Winter 2009: I’ve had a pile of requests down the eastern seaboard and Florida
in the US, so I’ll be assembling a tour from January through March.  Contact
me if you’re interested in having the museum come to your church or group.