I normally only send out these newsletters in text-only format, for the sake
of those whose email systems only recognize text. However, I wanted to
include some photos with this newsletter, as a few of the items are of
tremendous importance, and I wanted you to see the evidence first hand.

Thank you to all of those who have been praying for my father, he is home now
but still in need of a lot of prayer as he is still very sick, his eyes are
still in bad shape, and being so sick for so long at such a young age (57) ,
he’s been a little discouraged. My mother as well was by his side for all 76
days that he was in ICU in Ottawa, and of course, this has all been very hard
on her as well. So thank you for your continued prayerful support. 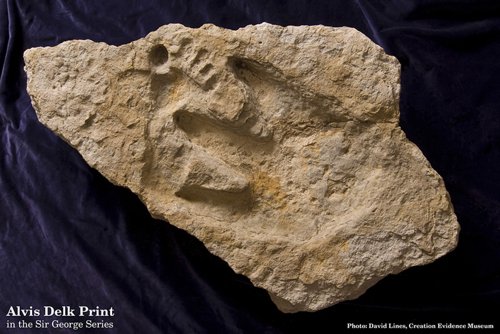 Just acquired by the Creation Evidence Museum, this has got to be the single
most spectacular fossil footprint ever to come out of the Paluxy. Found in
2000 by an amateur archaeologist, Alvis Delk of Stephenville, Texas, he found
it as a loose slab against the bank of the river. He flipped over the rock
and saw an excellent dinosaur track, so he took it home where it sat in his
living room for years. Sadly, this past year he had a very bad accident where
he fell off of a roof and landed on his head. He was in the hospital for
months and has a blood clot in his brain which can kill him literally at any
minute, so he’s living on borrowed time.

Once he got home, he decided he would sell the dinosaur track, figuring Dr.
Carl Baugh would pay a few hundred dollars for it. He began to clean the
rock, and that was when he discovered the fossil human footprint which was
still preserved underneath the dried clay! The human footprint had been made
first, and shortly thereafter (before the mud turned to stone), a dinosaur
stepped in the mud with its middle toe stepping on top of the human track.
You can actually see the displaced mud from the dinosaur’s middle toe inside
the human footprint. One could conclude from this evidence that humans were
around before the time of the dinosaurs!

Spiral CT scan of the track

Dr. Baugh had conceived of an idea a number of years ago to use spiral CT
scans to analyse fossil footprints, as you can see compression made by the
footprints which now appears as density changes in the rock. The slab was
taken to the Glen Rose medical center where spiral CT scans were performed on
the rock. I’m producing a short video explaining what CT scan is, how it
works, and its perfect application for the analysis of fossil footprints which
have not been found in-situ.

In short, taking a brief look at one of over 800 scans taken of the rock, and
remembering that the whiter the area in the image, the denser the rock is,
you’ll notice that in patches surrounding both the dinosaur track and the
human track, as well as immediately underneath the arch of the human track,
the rock is compressed. This validates the authenticity of both tracks,
showing they are not carvings but genuine fossil tracks.

According to evolutionary theory, dinosaurs were supposed to have become
extinct at least 60 million years before humans ever evolved, whereas the
bible states they were created together on day 6 of the creation week. This
is profound evidence supporting creation and refuting the evolutionary myth.

On the way down to Texas, I went to an abandoned coal mine in Tennessee. This
polystrate fossil tree was first photographed in 1975 by National Geographic,
when it was exposed by the mining operation. It is buried vertically in the
rock, cutting through roughly ten feet of strata – hence the name
“polystrate”: ‘Poly’ for many, ‘strate’ for the strata it cuts through. It
cuts through many strata. Based on the other polystrates in the area,
it actually bends as it enters the cliff at the overhang and proceeds through
another four or five feet of strata.

These polystrate plants are quite common, and it should be noted that this is
not a tree, but Lepidophloios which is a type of Lycopod – a giant, hollow
reed. The conventional interpretation is that these plants were buried “in
situ,” that is, where they grew. However, I examined the entire area.
Although I found over a dozen of these large polystrate lycopods, and over a
dozen polystrate Calamites (also a giant, hollow reed which is still around
today as the horsetail rush), not a single root was found anywhere – not
in-situ, and not in the tailings from the mine.

At Joggins, in Nova Scotia, these same plants are found by the many dozens, in
the polystrate position. You can read about these cliffs on my website at:
http://www.ianjuby.org/jogginsa2.html

The stumps are often missing roots or rootlets. It is obvious that these
trees were not buried where they grew – they were ripped up by a flood. To
bury such large trunks like this would require a very large flood indeed, and
I would suggest that the evidence as a whole clearly indicates that it was a
global flood. Indeed, the VISS and the prominent crossbedding all demand
powerful water flows.  For more information on crossbedding and the
research we carried out at the Creation Evidence Museum research
facility, see:

I went to Tennessee to mold the plant and the cliff surrounding it. After
backpacking over extremely rough and steep terrain, with literally
hundreds of pounds of gear and supplies (a mile, one way!), I was only able to mold the tree
itself. The Creation Evidence Museum now has a cast of the Tennessee
polystrate lycopod, with the cliff faithfully reconstructed. It is very
prominently displayed just outside their brand-new museum building. Do visit
the museum in Glen Rose, Texas if you get the chance.

Also just assembled (and shown almost finished) was a new display at the Akron
Fossils and Science Center, in Akron, Ohio. The eruptions of Mt. St. Helens
in the early 80’s provided many profound lessons from catastrophe that could
be applied throughout the geologic record. The display incorporates a
multimedia presentation (with a video system donated by Todd Styer, a
supporter and advisor for the museum), as well as a slide sequence and dramatic relief
map of the mountain and area.

As a quick example of one of the many lessons learned, a canyon was carved out
in days which was over 100 feet deep. Steep walled canyons require fast
moving water, not deep time. This canyon was roughly 1/40th the size of the
Grand Canyon. Let’s assume then that the Grand Canyon took 80 times as long
to form; that is still less than a few months – not the millions of years
assumed by old-earth advocates.

I have had many people ask about the series, when it will be done, how much it
will sell for, etc… Thank you for writing the encouraging words.

Because the series is still in production, I do not as yet know how many
videos will be produced in the set. It will probably be 24 or 26 segments,
with each segment being 28-1/2 minutes long (for suitability to television)
and can be used for Sunday school classes, personal studies, etc… We will
hopefully be having it aired on a number of television avenues, so please pray
for this series.

The DVD set will thus be somewhere between 12 and 14 DVD’s, depending on
editing and how many segments are produced to “answer the detractors” –
segments produced to respond to the detractions posted on youtube and elsewhere.

I try to keep the cost of my DVD’s down, so normally I sell DVD’s for $15
each. A set of 12 would normally be $180, so I’m guessing that the set of 12
would probably sell for $150 – but at this point I do not know. I will have
to wait until production is done to see what the sets cost me and what I can
sell them for. I do hope to have production finished by the end of August –
please pray for me that the editing will go quickly and smoothly.

The entire video series can be viewed on both Godtube and Youtube, just look
for the user name “Wazooloo” (that’s me), and on Youtube there is a playlist page
(http://www.youtube.com/view_play_list?p=11166601CA0FB279) showing all of the
videos in the series, and the first of many responses to the skeptics,
entitled “tip-toe through the Tapeats.”