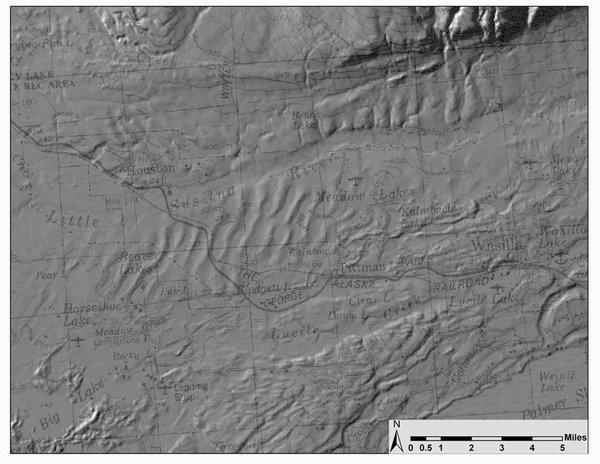 Oh look – giant wave ripples in Alaska!  From a “megaflood.”  Now notice that whenever chatter is made of megafloods, it is always in reference to an ice-age lake breaching its dam.  Well, 100 foot high wave ripples, spaced a half-mile apart is a pretty big lake.  Reading the article, you’ll notice the researchers are not afraid to use catastrophic terms – as long as it does not refer to a global flood.

Such giant wave ripple features are not at all uncommon either.  This is what led to the discovery of the Missoula flood (not much doubt that one was an ice-age lake), and you can see giant wave ripples all over Alberta, Manitoba, and at several locations here in Ontario.

While I don’t doubt that some of these are from ice-age lakes, I would suggest that at least some of these giant wave ripples are actually from the receding flood waters of the global flood.  But, because evolutionary thinking does not allow for there to have been a global flood, this possibility is not even considered – in spite of the evidence, not because of it.

I should be clear too: Evolution will not permit consideration of a global flood.  Science is perfectly open to it – there is a difference between the two.  Science pursues the facts, Evolution does not even permit possibilities – the opposite of science.

Here are some KMZ links for Google Earth/Worldwind to view the giant wave ripples in Alaska and Manitoba:

The wave ripples in Manitoba are about 1 kilometer, crest-to-crest, and up to 15 meters high.  I know this because I went and personally studied them after seeing them from a jetliner.