The Sauropods and the Incans

In 1991, Scandinavian excavations of several Sauropods revealed a surprise: The Sauropods (all of them?) seemed to have beautiful rossette patterns in their skins and had vertebral fins. An example of these rosette patterns appears on this section of fossilized dinosaur skin from an Ankylosaur: 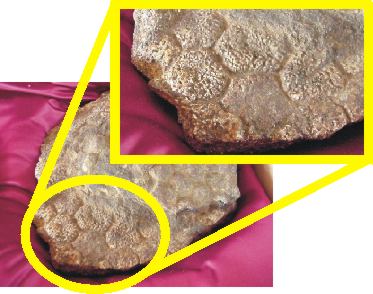 Click on the picture for a full-sized image and descriptive tour.

These rossette patterns have only been discovered recently. This particular fossil specimen is actually fossilized dinosaur skin, not an imprint. (See the high resolution photos for details on this)

The Nasca Incans (Tiawharaka tribes) often portrayed a story of a persons life carved on burial stones which they placed in the tomb of the dead person. Hundreds of these have now been found, many of which depict what sure appear to be dinosaurs. Some of them tamed, some of them definitely not. 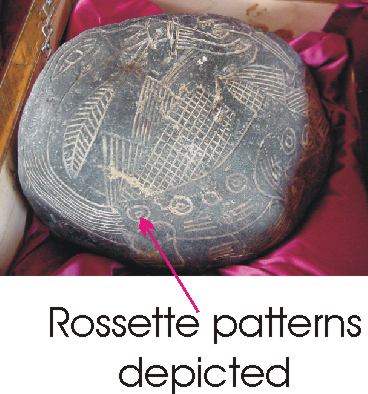 Click on image to open a new page with high-resolution photos and highlights.

This burial stone shows a man riding upon what appears to be a Saurapod, complete with rossette patterns depicted that we only discovered recently. It shows the man feeding the dinosaur while he rides it. Difficult to see in this photo, the neck of the creature wraps around the bottom to left hand side of the stone, it’s head and eye located at about 10 o’clock. The man’s hand, with grass or some straw in it, is top dead center with his head located at about 1 o’clock. 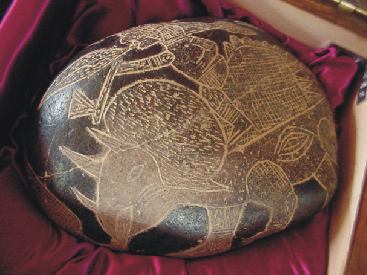 This particular stone shows a man riding upon an unmistakable Tricerotops. The only explanation for such clear depictions of dinosaurs is that the dinosaurs were contemporaneous with this culture.

According to evolution theory, man did not show up on earth until 600 million years or more after the dinosaurs became extinct. Fossil dinosaurs were not even discovered until the mid 1800’s. Yet these burial stones were carved by a culture that only existed from about 400 B.C. to 1400 A.D. It is possible these stones might have been carved as recently as 600 years ago depicting dinosaurs these people apparently saw and tamed as pets or beasts of burden.