Giantism in the fossil record: Part I

I’d like to begin a study on the amazing fossil and frozen records. Both these records provide baffling mysteries for both the Evolutionists and the Creationists. They tell a fascinating story of climatic and atmospheric changes in our earth’s past of mind-boggling proportions. I hope to piece together a book devoted to just these subjects in the near future.

For example, giantism in the fossil record is widespread, but rarely talked about. Take a trip to the museum of nature in Ottawa, Canada, and tucked away in the corner of the dinosaur room are two subtle displays: Giant Beaver and Giant Moose. They have a tooth and jaw from this Giant Beaver (Castoroides ohioensis). 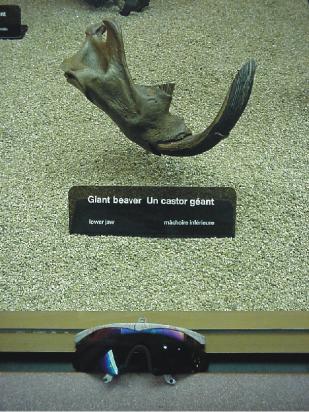 There is an excellent on-line article here on this ancient critter, which ran up in size as large as 9 to 12 feet long! (2.5-4 meters!) Compare this to a typical modern beaver running in at 1 to maybe 1.5 meters (3-5 feet snout to tail). And we think they’re a nuisance now?

The thing of it is, this is commonplace in the fossil record.

Right beside the Beaver (or what’s left of it, anyway) is the fossilized antler beam from a Moose. They typically grow about 6 feet tall at the shoulders currently. Conveniently enough, just inside the main entrance doors of the museum they have a glass case with two modern Moose antlers. These poor Moose were apparently having a duel when they’re antlers became hopelessly stuck together, causing them to starve to death. One can now compare the fossilized Moose antler beam to a modern one within a short walk:

Although the measurements are estimates (alas, I couldn’t get to them and also didn’t bring my measuring tape), the fossil shows that ancient Moose were probably twice their current size, standing probably 12′ tall (4 meters) at the shoulders. 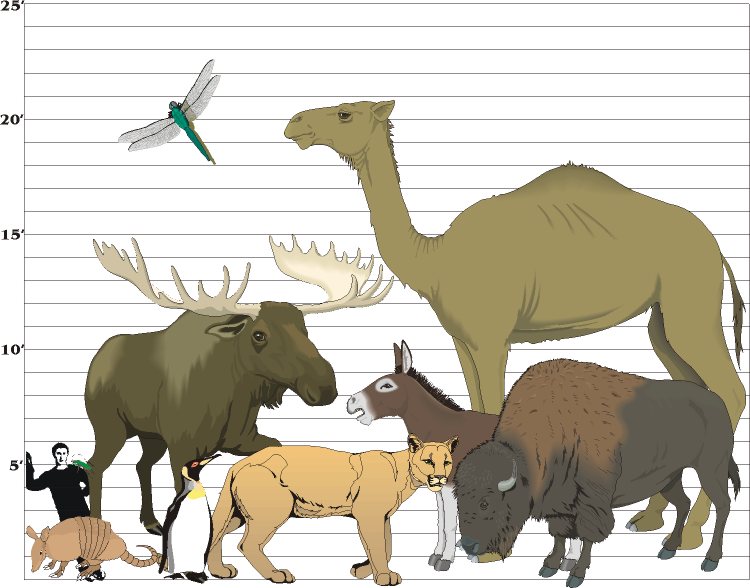 Piddly modern man is standing at 6′ tall by the left hand margin. Please notice the 12″ long cockroach on his shoulder. I have painted the cockroach neon green strictly for visibility, as cockroaches are not neon green naturally (except here in my home town of Chalk River, home to Canada’s largest nuclear research lab :-). Examining the fossil record and finding these foot-long bugs proved that it is indeed possible for cockroaches to be more disgusting than we already thought they were.

Forgive the clutteredness of the picture; I was having a hard time fitting it all in.
In front of the guy with the giant, neon green bug (and I’m not referring to a volkswagen… yet) is a fossil armadillo, that for all intents and purposes is identical to the modern day nine-banded armadillo… except in size.
This armadillo was about six feet long and weighed in at around 500 lbs (over 220 kgs)1. A cousin of it, an ancient armadillo called the Glyptodont, was approximately the size and shape of a volkswagen beetle (ah, there’s that beetle I was talking about earlier). But this “ancient armadillo” was found in the ANTARTIC, not too far from the Penguin, shown in the picture which stood over five feet tall!2 Armadillos and cold do not mix. They really hate each other, and the armadillo is usually on the losing end of the stick in that battle, they tend to die when it gets too cold. What on earth was it doing down in the Antarctic??? (Wait for it.)

But of course, there’s also the Meganeuropsis, the giant dragonfly. Found in the fossil record with wingspans typcially three feet across, one was found in Italy in the early 90’s with a FIVE foot wingspan.7.

This all poses a dreadful problem for evolution: This is not evolution, this is devolution! We were supposed to have risen from smaller, simpler lifeforms in our long ascent from bacteria. Instead, it appears we have lost something! The Creationists also need to answer this dilemna.

Just HOW does one explain all of this?

Next lesson: Still more giantism (we haven’t hit the REALLY big ones yet!)

1. On line resources: http://exn.ca/Stories/1997/12/17/05.asp
2. On line resources: http://www.geo.nsf.gov/geo/adgeo/press/pr9523.htm
3. Based on measurements of the Burdick print, photos on line at: http://www.bible.ca/tracks/cat-track.htm
4. Based on fossil cast of a Bison skull I have personally held, on display at the Creation Evidences Museum, Glen Rose Texas.
5. Joe Taylor, Mt. Blanco Fossil Replicas, personal correspondence, 2000.
6. Ibid. ” I have parts of [a] giant camel … from more than one part of the canyon. Two were excavated in the sixties that
were twenty feet tall. One was laying on top of peccary remains. I have collected the remains of dozens of giant crocs. called Phytosaurs. Most were 25 feet long. I have teeth and jaw sections of one or two that maybe 30 or 50 feet long. I found the front teeth to a donkey that would have been up to 9 feet tall. It is the same size as one from Seymour Texas that Walt Dalquist of Midwestern State U., Whiticha Falls Tx, found. He did a paper on the Assinus giganteus.”
7. Personal communication, Dr. Carl E. Baugh, director, Creation Evidences Museum, Glen Rose, TX