From Atoms to Traits

The continuing saga of the January 2009 Scientific American “The Evolution of Evolution” special edition – see bottom of page to links to the other commentaries.

“From Atoms to Traits” is the next article in the magazine, for which there’s really not a whole lot to say. It is the typical “Open by stating evolution is a fact, go into a whole pile of science speak, close by pointing out that evolution is a fact, go home and get a coffee.” The majority of the article is interesting, informative, and true. The majority of the article has nothing to do with evolution. But there’s one twist prevalent throughout the article:

The author of this SciAm segment, David Kingsley, (professor of developmental biology at Stanford) starts this segment off with the brazen (and flat-out false) claim that “Modern scientists are revealing how that diversity arises from changes to DNA and can add up to complex creatures or even cultures.” (emphasis mine) 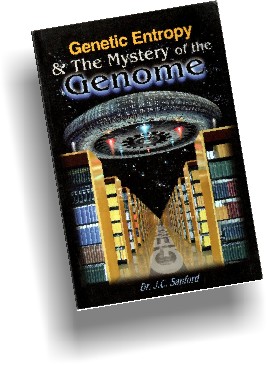 Let me simply respond to this opening statement by referring you to an excellent book, but it’s a book not for the faint of heart. It’s very technical, although Dr. Sanford did an excellent job of explaining complicated genetics in fairly simple terms – but even then it’s still a tough read for most.

“Genetic Entropy” is a compilation of the results of some of the latest research in genetics. The gist of the book is this: The DNA of all of life is deteriorating.

In other words, scientifically speaking, life is losing complexity, not gaining it, as is required by evolution, and falsely claimed in the SciAm article.

Kingsley is correct in saying that changes in the DNA are adding up, however, they are adding up to larger and larger accumulations of errors. Think about it this way: Take a telephone book, or a dictionary. Either one contains a lot of information. Now randomly remove or add random letters throughout the book.
Does such action add to, or take away from, the information? 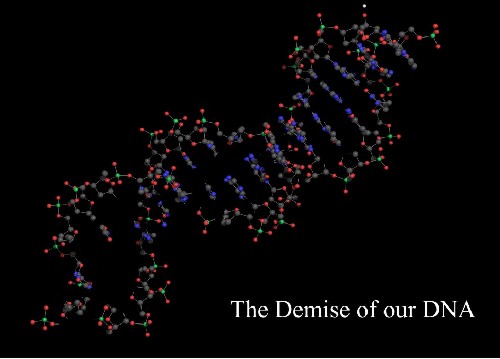 Now back to the genome: We are accumulating random errors in our DNA (the genome), which is the blueprints on how to build you, or a fish, or a tree, etc…

The rates of accumulation for these errors (and loss of information) in the DNA have effectively sealed our “doomsday” for us. In fact, these rates are so high, that it’s alarming.

That doomsday may be hundreds, perhaps even thousands of years down the road, but it does tell us one thing:

We have not been around for millions of years.

For example, read A.S. Krondashov’s 1995 article, “Contamination of the genome by very slightly deleterious mutations: Why have we not died 100 times over?” (Journal of theoretical biology, 175::583-594)

Presumably these observed mutation rates have been going on since the beginning of man. We’re concerned about how much longer we’ve got as a human race, because these mutation (error) rates are so high. So just how have we survived millions of years? I’d suggest we haven’t – we’ve only been around for a few thousand years, and the creation was “perfect” at the beginning, and is deteriorating. But, I’m just a cooky creationist – what do I know.

It also means that we are losing complexity, not gaining it. Our DNA is disingtegrating.

In his article, it appears Dr. Kingsley doesn’t clue in to the significance of what we’re talking about here. On page 55, first paragraph, he says:

“Absolute rates of mutation differ in different species by typically average 10-8 per nucleotide per generation for single base-pair substitutions.”

Doing the math on a 3.2 billion base pair DNA of a human, that’s roughly 32 errors per generation. While this number alone spells doom for humans, the numbers are actually considerably higher. According to Krondoshov, the number is actually between 100 and 300 per generation, and that’s just for the germ (reproductive) cells!

What does that mean? Let me put it to you in terms of a book. We’re going to make a copy of a book that has 3.2 billion letters in it, but replace 32 random letters in the book everytime we make a copy of it. We then take the copy, make a copy of it, adding another 32 random mistakes into it, and so on. How many times can we make these copies before the book becomes unreadable? You see what I’m getting at here: The book will be useable for a while, but continually degrading – eventually getting to the point where it is unreadable.

There is another error Kingsley makes, and that is the assumption that variation is the result of mutations (errors) in the DNA.
Errors in the DNA (mutations) are not good! For every ‘beneficial mutation’, there are literally millions of neutral to negative mutations – which are preserved and add to a whopper of an error load in the DNA. Yet throughout his entire article, Kingsley props up mutations as the incredible source for the variation of the species!

Now some have claimed that genetic errors have caused a benefit for an organism. While there has been a few cases of arguable benefits from these errors in the DNA, they are exceedingly few, and far between. Also, without exception, every single one of those cases was a loss of information, and a loss of variation with the species.

The variation in the DNA (such as change in hair colour, etc…) are simply programmed into the genes. These variations are not the result of errors, in fact the errors are the source of destruction for the DNA.
A classic example are bacteria that somehow “evolved” to be able to digest nylon. As it turns out, it appears that this is a preprogrammed function in the bacteria (see Don Batten’s article on the AIG website).

You can’t have good evolutionary propaganda without the nice, fictitious diagrams of ape to man. So SciAm makes sure to not disappoint us. One thing that’s humorous is that I regularly quote a previous SciAm article where the author wrote “The fossils are set in stone, their interpretation is not.” But when it comes to evolution, the fossils are worth far more than their weight in gold, and if you were to weigh the claims made of these fossils, the claims would probably outweigh the fossil itself ten to one!

I’ll address some of the fossils specifically, but first, a quick crash course in identifying fossils.

There are numerous differences between ape and human skulls that allows for identification. There are some wildcards though: Let us not forget the incredible variation that can occur within a species (see part 1 of this commentary). Humans and Apes are no exception. Furthermore, the fossil record is one of extinction, and thus we could have a wide variety of apes in the fossil record that are not around today. Furthermore, fossils are typically found crushed, fragmented, or incomplete. There is a lot of room for error, interpretation, and bias. Also, evolutionists (who do most of the digging for said fossils) have preconceived notions about what to find, and can literally mix human and ape fossils together into composite skeletons making true “ape-men”… that never actually existed. Lastly, a little known fact is giantism in the fossil record: Most (if not all) lifeforms had larger representatives in the past then they have today.

One difference between apes and humans is the shape of the jaw.

As you can see, apes have a “U” shaped jaw, while humans have a parabolic shaped jaw. Seeing as how evolution has a frog turning into a prince (or an unknown amphibian turning into a university professor if you want to get technical), I’ve included Kermit’s jaw shape for comparison.
Keep this in mind when comparing fossil homind skulls.

Artistic renderings:
But now you’ll notice that in the SciAm article, there are nice drawings depicting what these “hominid” creatures probably looked like. These images serve no purpose, except wild speculation and propaganda. They have no scientific value.

Such images always take “liberties” in their reconstruction. One common tactic used in both magazines and museums is subtle human features depicted on apes. For example: 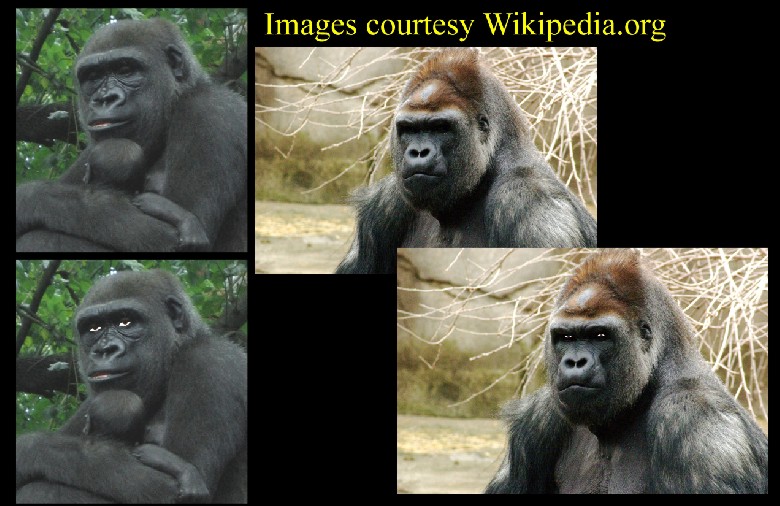 By merely giving human eyes to an ape, or an ape-like creature, human like expressions and emotions (and even intelligence) can be portrayed and communicated. Notice what ape eyes really look like in the untouched photos, and then with human eyes thrown in for effect. It’s very subtle, but very powerful. Now look at the nice brown eyes depicted on homo habilis in the SciAm article.

To their credit, the artists at SciAm actually did make the eyes on the apes look like ape eyes, with the exception of H. habilis.

One major difference between human and ape skulls can actually be seen in some of the pictures of the “hominid” skulls on the timeline chart of pages 61-63. Humans have a bony nose-bridge, apes do not. There is a simple test to tell if a skull is ape or human, I call it the OculusTM test (Oculus is latin for glasses):

As you can see, Homo erectus is clearly man – he can wear glasses. Zinji on the other hand, cannot because he is missing that vital, bony nose-bridge because he is an ape.

So examining the photos of the skulls in the SciAm timeline (see diagram below on pages 61-63):

You can already get a feel for which skulls are ape, and which ones are human.

Also, you see those nice, pretty lines on the drawing? Those are indicators of the best guess, because of the absence of evidence.
But let’s go down the list of supposed “evidence” that is provided. Rather then reinvent the wheel, I will simply provide links to different online articles dealing with the specific fossils at hand:

At this point, there’s not a heck of a lot to say. From what very little I’ve been able to see, I haven’t been impressed with the arguments that they’re not human. As it is, even the evolutionists are up in arms about the interpretation of these bones (which aren’t fossilized). The apparently tools found in the cave appear to be appropriate for a 1 meter tall human, which seems to lend credence that the “hobbit” was an intelligent being. Frankly, even if it turns out to be another “species,” I fail to see how this supports evolution.

After all of this, have you noticed that evolutionists never seem to find any fossils from apes? It’s intriguing to note that all of these “ape-like” human ancestors are being found, but no ancestors of apes! Coincidence? 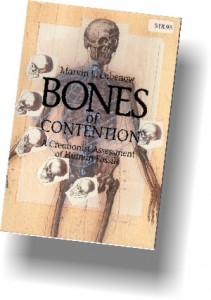 I’d highly recommend Marvin Lubenow’s book on the subject of supposed “ancestral human fossils.” It is easy reading, and chock full of good history and analysis of many fossil hominids.