An excellent question. I was getting there in my presentation, but alas, I ran out of time. TDG was very gracious and even acknowledged that I did only have so much time to present my case. This is a question Creationists sometimes get razzed for.

A couple of comments are pertinent first.

Creation and Evolution exhaust all other possibilities:

Either we were created by a being who is not only outside of our natural laws, but created those natural laws – OR – we evolved through extranatural processes which defied known natural laws.

There are no other plausible arguments for the origin of life. Therefore, an argument against evolution is, in a general sense, an argument for creation.

We need to look at the evidences to see which theory has more credence. You cannot “prove” it either way, really. TDG’s question is a pertinent one.

Proof of a Creator: 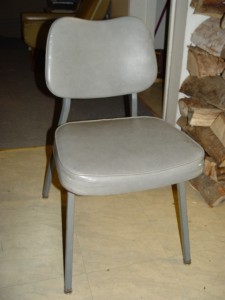 Take a look at this chair.

I pointed out the irreducible complexity of both living cells and the bacterial flagellum. Those who have stumbled onto this webpage and haven’t got a clue what I’m talking about, are welcome to read the flagellum argument here.

Creationists frequently get ridiculed for not having enough blind faith. The “argument of incredulity” is definitely a valid argument.

Judge for yourself: Is it more scientific to conclude that this chair was formed by random, natural processes without any guidance, or that it was deliberately fashioned?

Let’s test the hypothetical answers with the Hogwash-O-Meter®:

“This chair was formed by natural processes without any intelligent influence.”

One look at this chair, and one immediately recognizes the evidence of intelligent design! It is a perfectly logical, scientific conclusion to assume it had a creator, though we’ve never seen that person, nor did we see them make it.

The argument of Homologies:

Incidentally, a common argument in favour of evolution is homology. Basically, when one looks at different animals, you can see similarities in the skeletal structure between them. This is considered evidence that they evolved from a common ancestor. I agree that this could be interpreted that way, however this is (at best) a weak argument. For example, there are plenty of chairs around, and they frequently look the same! This is just as much an evidence of common design, (i.e., it works well, use it in other designs!) just as much as it could be argued they evolved from the same ancient chair.

Homologies are left in the dust however, when one brings the duckbilled platypus into the picture. These arguments of homologies are pertinent to the “Suspected references” response.

Radiohalos: Evidence of an instantaneous formation of earth

The next part of my opening talk would have included the evidence in geology for a young earth, and an instantly created one. Rather than re-invent the wheel, I will merely point readers to my already published webpage on the radio halos in granites. This is irrefutable evidence of an instantaneous formation of earth’s granite crust, and presumably, earth itself.

In brief, the granite crust of the earth has no natural origin. Anyone who would beg to differ is quite welcome to answer this challenge by merely producing synthetic granite in the lab. It IS physically impossible. Furthermore, the granite we do find shows evidence of instantaneous formation.

This happens to be a subject I am very knowledgeable in and about which I am quite willing to field questions and detractions.