A letter with questions regarding the age of the earth

Recently, while Dr. Carl Baugh was on a research trip, questions coming into the Creation Evidence Museum were being forwarded to me. One of them was an excellent letter from a Doctorate in Nuclear Physics. He had asked many pertinent questions which I often hear. So I thought I would post it here for youse guys (that’s Canadian for “y’all”) to enjoy.

Dr. Baugh is out of the country currently, and so your recent letter to him was forwarded to me in hopes that I might be able to respond. My name is Ian Juby, I am a consultant of the museum and a friend of Dr. Baugh’s.

You asked some excellent, pertinent questions which myself and many others have also asked. As fellow skeptics, Dr. Baugh and I respect such questions, and I am happy to respond.

Your first and second question are intimately related, so I will address them both at the same time. You had pointed out that there are no naturally existing long-life isotopes with half lives shorter than 1E9 years. You also enquired about the apparent difference in radiometric “age” between layers that were supposedly laid down by one event, the global flood of Noah.

I would recommend an excellent book, the RATE II book, which is the compilation of an eight year study carried out by a team of scientists. It is
available for purchase online at the Creation Research Society’s website: http://creationresearch.org/Merchant2/merchant.mvc?Screen=PROD&Product_Code=BK-RAD2&Category_Code=B&Product_Count=139

Creation Research Society was one of the organizations that helped fund this study. It is an expensive book at $80, but worth every penny. I will give you the run-down on the results in a moment, but first, let’s look at some background information:

The Creation Evidence Museum is built on the banks of the Paluxy River, which is famous for its “Cretaceous” dinosaur footprints. These are supposed to be ~100 million years old by conventional dating methods. As I’m sure you are already aware, one cannot date sedimentary rock, therefore these ages are relative to other layers which can be dated. However, these layers contain quite a bit of biomatter, such as coalified plants or dinosaur bone, which can be carbon dated.

Dr. Baugh and numerous others have succesfully obtained C14 dates from such samples for decades now. These dates vary from 5,000 to
50,000 “years BP.” Hugh Miller compiled many of these results, and results from multiple samples from literally all over the world, in his article in Creation Research Society Quarterly (Vol 43, No. 2, pg 84, September 2006 “Pioneering 14C Dating of Wyoming Amber and Its Implications for a Young Earth and Global Catastrophism”) I supplied him with some coal samples from the coal beds of Eastern Canada, conventionally dated as carboniferous; I do not know as of yet whether those samples have been tested or not.

John Dougherty also published similar results for numerous gas, oil and CO2 wells – all of which should have absolutely no C14 left in them. Their high C14 ratios indicates an “age” of only a few thousand years – far short of the claimed age of those layers as hundreds of millions of years (Creation Research Society Quarterly, Volume 44, No 2, Fall 2007, Dougherty, “Deep Wells – Deep Time?”, also “Isotopic Analysis of Fruitland Formation Coal Bed Carbon Dioxide and Methane”, September 2006 CRSQ)

As part of the RATE study, coal samples were collected by Dr. John Baumgardner (Los Alamos, retired) which all had significant levels of C14 in them. Anything older than 100,000 years old should have no C14 in it. As pointed out by Baumgardner and Dr. Russell Humphreys,(personal communication) they took the coal samples (supposedly millions of years old) and sealed them in a barrel purged with nitrogen to counter any possible contamination. While I am certainly not an expert on such matters, I have never heard of anyone taking such steps to avoid contaminating a sample for C14 dating.

But let’s assume that the coal somehow, miraculously, absorbed an equal volume of modern air. This would cause the pMC value to increase by .0001. This cannot account for the pMC values of .2 to .4 that were obtained from this coal. So we have an apparent problem: Many of these layers, or associated layers can be dated using typical rock-dating methods which give “ages” of hundreds of millions, sometimes billions of years – while simultaneously giving Radiocarbon ages of 5,000 to 50,000 years! Which one is correct?

Even C14 dating methods are still founded in untestable assumptions; i.e., the assumption that the C14/C12 ratio in the atmosphere has always been the same. There are many reasons to question the “old ages” (i.e., anything above the half-life of C14, ~5,000 years) of C14 as well.

Other dating methods indicate a few thousand years, not millions

Dr. Robert Gentry published numerous articles on radiohalos throughout the years. One of these articles was a study of these rings of radiation damage (radiohalos) in coalified wood. He noted that the rings were formed, then crushed flat when the wood was compressed into its now coalified state. A second ring was sometimes produced afterwards, and thus was not flattened. Samples were taken from the Eocene, Jurrassic and Triassic – a “time span” of 37 million to 245 million years. However, the radioactive decay of the Uranium within the halos indicated that only “several thousand years” had elapsed since the formation of the coal! There was no “millions of years” – only a few thousand (Gentry, R.V. et al. 1976a, “Radiohalos and Coalified Wood: New Evidence Relating to the Time of Uranium Introduction and Coalification.” Science 194, 315.) All of Gentry’s articles can be found on his website: http://halos.com

Another example of the major contradictions that radiometric dating methods  face comes from the Grand Canyon. For simplicity, I’m including this image from one of my slide shows: 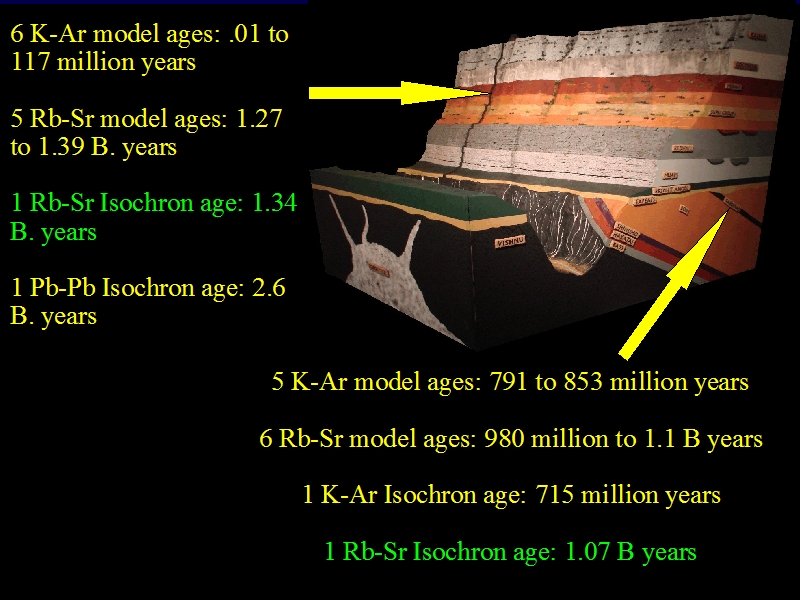 Various radiometric dating tests were performed on two lavas in this area; the Cardena basalt (in the supergroup, lower arrow) and the lava flows on the plateau, which flowed into the canyon. Clearly the plateau flows are younger, yet the R-S isochron methods gave it an older age of 1.27 billion years compared to the Cardenas basalt which gave an isochron age of 1.1 billion years at most!

This was compiled primarily in “Grand Canyon: Monument to Catastrophe” by Dr. Steve Austin, which sadly I can’t seem to find anywhere, however, it was also referenced in Dr. John Morris’s book, “The young earth”, which is available through Creation Evidence Museum. (254-897-3200)

Specifically pay attention to slides 19 through 23. The Native Indians actually captured some of the flowing Uinkaret lavas as part of their
religious rituals. Therefore we know that those lavas flowed roughly 800 to 1,000 years ago, and the R-S isochron method (deemed one of the most reliable radiometric dating methods ever produced) is completely unreliable – not even close.

As John Woodmorrappe put it, if those who believe in deep time are free to reject the dates that don’t line up with their preconceptions, than so are we. Incidentally, this brings me to another fantastic book on this very subject, “The Mythology of Modern Dating methods”, which I’m sure you would also enjoy very much.
http://creationresearch.org/Merchant2/merchant.mvc?Screen=PROD&Product_Code=BK-MYT1&Category_Code=

John is a methodical researcher and an excellent writer.

Creationists had been criticized for years for pointing these problems out. We were told to “make your own dating methods then,” which we did, and this was part of the RATE project.

Dr. Robert Gentry mentioned an anomaly in his research on zircons found in granites many years ago. (Gentry, R.V., 1982b, Geophysical Research Letters 9, 112, “Differential Helium Retention in Zircons: Implications for Nuclear Waste Containment.”) He noticed that the helium produced by the radioactivity of Uranium in the zircon crystals was retained within the crystal. Helium, because of its small atomic size, is quite free to leave the crystal, yet there was an excess of helium within these supposed “2 billion year old crystals.” 2 Billion years was certainly enough time for the helium to leak out of the crystal!

So the RATE team took this concept and ran with it. They made two predictions of the helium diffusion out of the zircon crystals: 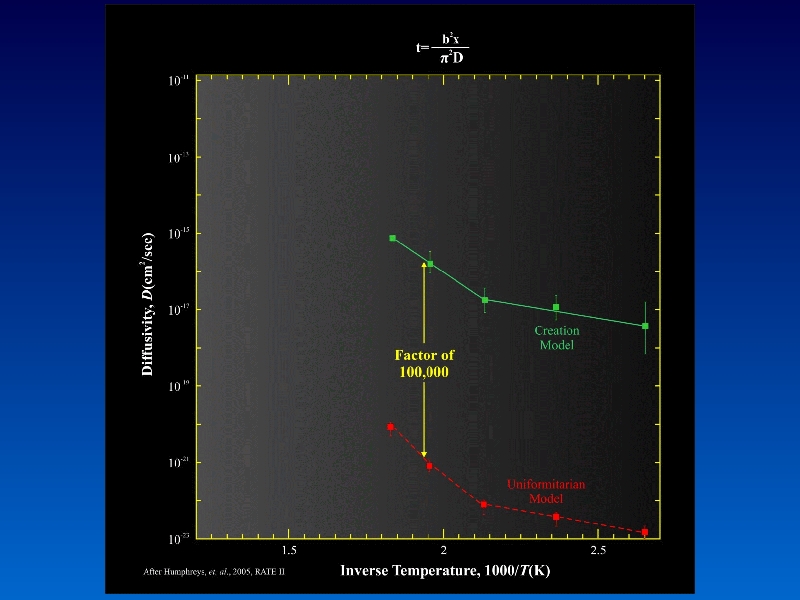 The green bars represent the helium diffusion rate prediction for a 6,000 year old earth, the red bars are the predicted diffusion rates for the 2 billion year old age assigned to the granite the zircon crystals were removed from. The difference between the two is a factor of 100,000 – obviously this removes a lot of experimental error.

When the helium diffusion rates were actually measured, they landed squarely on the predictions for the 6,000 year old earth (results in purple): 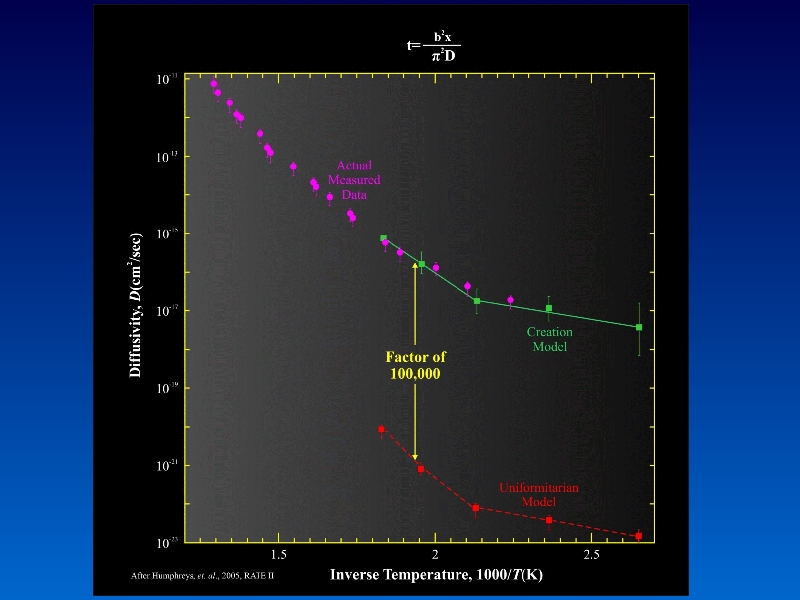 This brings me to your first question, which ties in to all of this. Why is there no long half-life isotopes? The amount of helium in the zircon crystals suggests that “2 billion years” of radioactive decay has gone on within the crystal; yet the crystal has only been leaking the helium produced by that radioactivity for a mere 6,000 years. Therefore they concluded that radioactive decay rates in the past were faster than present. To be more specific, the decay rates were inversely affected: the longer the half-life of the isotope, the more its half-life was accelerated. The shorter half-life isotopes had little change to their decay rates.

This throws out all of the old-earth dates that are produced by the various radiometric dating methods, as the assumption that decay rates have always remained the same is untenable. I have only given you a sampling of some of the overwhelming evidence that at sometime in the past, decay rates were radically faster than the present. There’s much more to this which I won’t get into now because I’ve already gone on long enough here.

Ice Cores in Greenland and Antarctica:

Your last question is a common one, regarding the supposed “250,000 years” of layers in the Greenland ice. One must first recognize the assumptions in this “dating method.” It is first assumed that one winter produces one layer. We count the layers, voila – we have an age. If I may respectfully say so, we do not have an “age,” we have a number of layers. The first article I would point to is from my good friend, Michael Oard. He is a meterologist who has taken a strong interest in geology and geomorphology in his later years. He specifically addressed many of the arguments used with the Greenland ice cores in the Technical Journal; conveniently, the entire article happens to be online: http://www.answersingenesis.org/tj/v15/i3/greenland.asp

However, perhaps you are familiar with “The lost Squadron?” This was a group of aircraft that crash-landed on the Greenland ice sheet in 1942, after running out of gas. The aircraft were only lightly damaged, and so years later, an expedition was launched to salvage the planes in 1988. This was featured in National Geographic in 1992. The search team was rather surprised to find that the planes were buried underneath 250 FEET of ice! Clearly the assumptions involved with the annual deposition of ice layers is wrong, as this works out to an average of over 5 feet per year! There is an excellent article, again conveniently on the Answers In Genesis Website: http://www.answersingenesis.org/creation/v19/i3/squadron.asp

This was published in Creation magazine, Volume 19, Issue 3.

Some will still contend that the layers indicate “years”, but I would once again point out that the observations are interpreted to indicated annual
layers. In short, assumptions are simply not fact. On behalf of Dr. Baugh and the folks at the Creation Evidence Museum, thank you for writing, and I’m glad to hear you and your wife enjoy “Creation in the 21st Century.” I hope I have answered your questions. Feel free to email me directly if you have any others, and I’ll see what I can do.

Yours truly,
Ian A. Juby